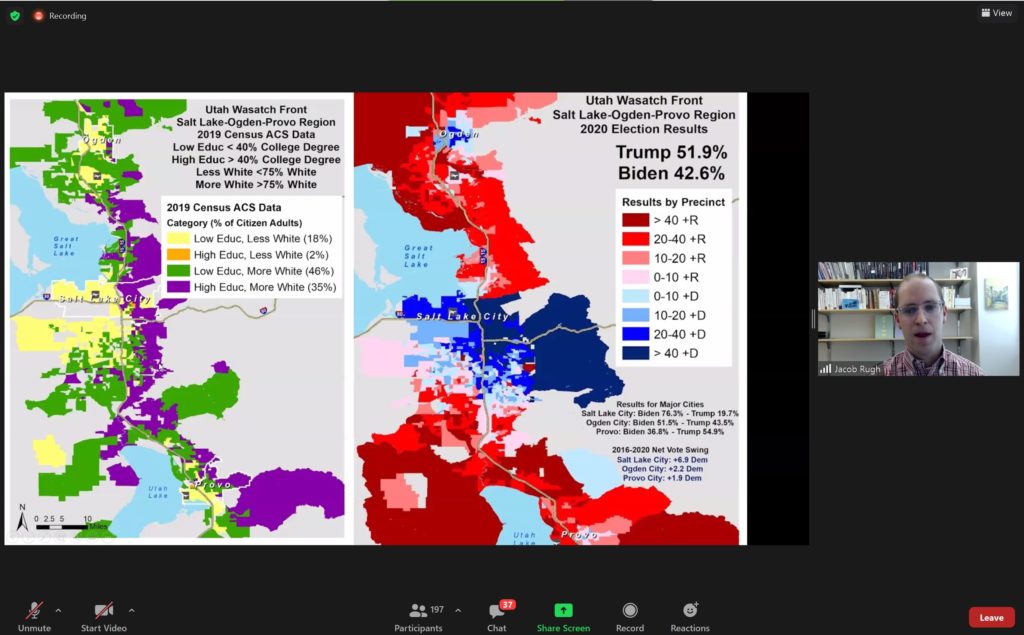 He used a series of graphs and maps to show how votes are becoming bluer over time in communities highly populated with Church members. Along the Wasatch Front, 239 precincts voted for President Joe Biden, a Democrat, and Utah Governor Spencer Cox, a Republican.

He also showed that areas of Arizona highly populated with Church members — Mesa, Chandler and Gilbert — are all 6.3 points more Democratic, and the Boise, Idaho area is 18% more Democratic and on the verge of turning into a blue county.

He partially attributed the rise in Democratic voters to changing generations, revealing through graphs the percentage of Gen Zs and Millennials projected to vote blue is nearly double the percentage of Boomers.

“Being LDS does not mean you are required to affiliate with any one political party,” he said.

Although his research shows highly educated Church members are leaning more Democratic, Rugh said he does not agree with the concept of partisan politics. “There’s no reason why all Republicans or all Democrats would be bad,” he said. “That doesn’t even make sense saying that out loud. Why would that be the case?”

Rugh also credited the influence of women who speak out and influence others. “There are many women who have different ideas of success than men.”

He said voting rights activist Stacey Abrams, for example, declined running for president or the Senate because she first wanted to see all people voting.

He shared the stories of Utah Rep. Sandra Hollins, who led the fight to abolish slavery language from the Utah Constitution; Jenna Rakuita, who received the highest vote share of any Democrat in Utah County, and Mehrsa Baradaran, a lawyer and author he described as a “powerful, progressive, LDS woman of color.”

The colloquium had an audience of 209 listeners at its peak. A recording will be posted on the Kennedy Center YouTube channel, and readers interested in seeing more of Rugh’s maps can contact him.