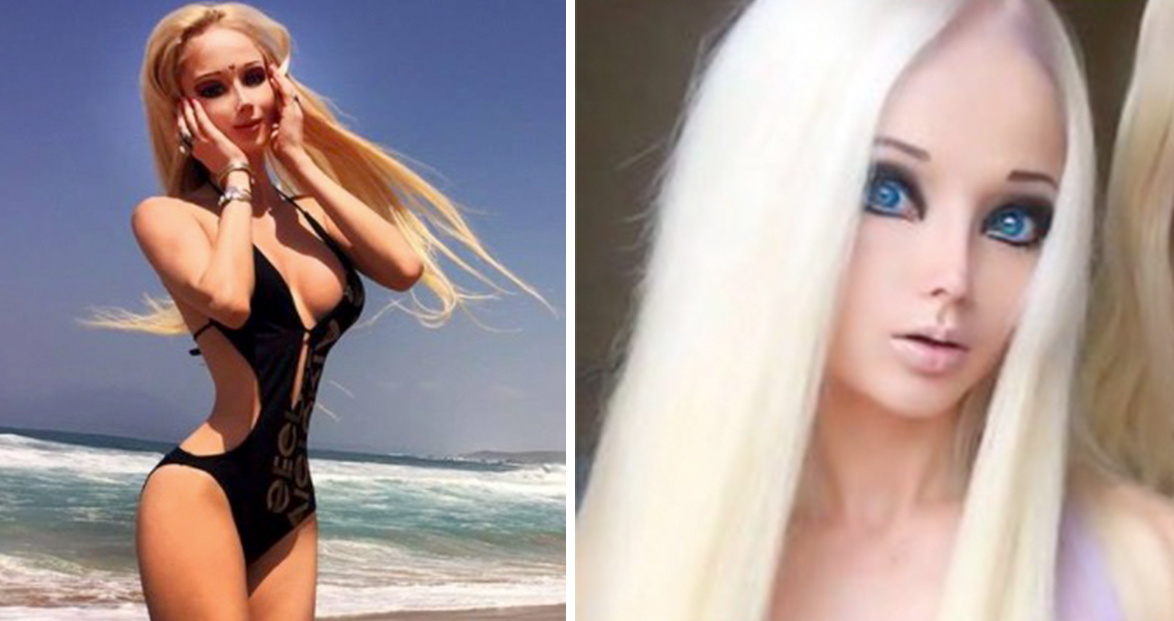 When I was young, it barely existed at all – but today it feels like everyone knows someone who has had plastic surgery. In a way it might be good, plastic surgery and injectables are no longer taboo. Not so long ago, it was something everyone knew about, but no one talked about. And as long as it boosts self-esteem and makes people feel better about themselves, I personally have no problems with people going under the knife – but sometimes you wonder if things haven’t gone a little too far. Valeria Lukyanova, also known as the ”Human Barbie”, took it one, or maybe 50 steps further, changing her appearance into that of a doll.

Some people choose to undergo plastic surgeries in an attempt to alter their look – but Ukrainian model Valeria Lukyanova changed her entire appearance.

Born in Moldavia, Valeria became famous for her resemblance to a Barbie doll. It all started with her winning the worldwide beauty contest ”Miss Diamond Crown of the World”. After that, Lukyanova has appeared in several documentaries and magazines.

At first, it was mostly Russian media who covered her story, but Lukyanova would soon gain a worldwide fanbase via social media. Her internet stardom started to rise after she published photos and videos of herself.

”At first, I really didn’t like it because there was too much attention. Some people even followed me, secretly taking my photo. That I don’t like. But then, with time, I got used to it. People always want to take my photo. I don’t refuse it now,” she said.

Her doll-like figure both fascinates and shocks people – many see her as an extreme example of society’s expectations on perfect beauty.

After that, her YouTube-channel skyrocketed.

A lot of viewers were horrified and lashed out at the young model, who had transformed herself into a doll-like human.

”She looks not only ugly, but ridiculous,” one wrote.

”A woman with completely perfect features is a boring woman,” another wrote.

Lukyanova’s body has always been the subject of scepticism. People were convinced that the young woman used plastic surgery or photoshop to carve out her waistline.

But Valeria denies that her body is the work of a doctor’s knife.

According to herself, she only had breast implants. The rest of her body is all natural and thin due to daily gym workouts and a strict diet. She has also denied that she had her ribs removed to make her waist smaller.

“It is hard work for many years and good genes… I do not drink, I do not smoke, and I lead a healthy lifestyle, my goal is powered by prana,” she said in aYoutube video, titled “Doll’s appearance is not everything.”

Sometimes Valeria opens up on social media to show a more natural and authentic side.

And when she posts photos of herself without the heavy layers of makeup, Valeria looks like a completely different person. Surely it’s quite fascinating to see her ”real” face for once. Valeria has built a strange mystique around her person; she’s almost unreal. But when you see what’s behind the heavily painted facade, it’s easier to understand her. And her thoughts on beauty and body ideals reflect her spiritual side. ”For me, beauty is the harmony of features and lines. Subtlety and sophisitication. Harmony of the external and internal. It is sincerity, kindness, power, and generosity that comes from within. All of these qualities are inspiring, and it changes your exterior. It’s a charisma”, she told InStyle.