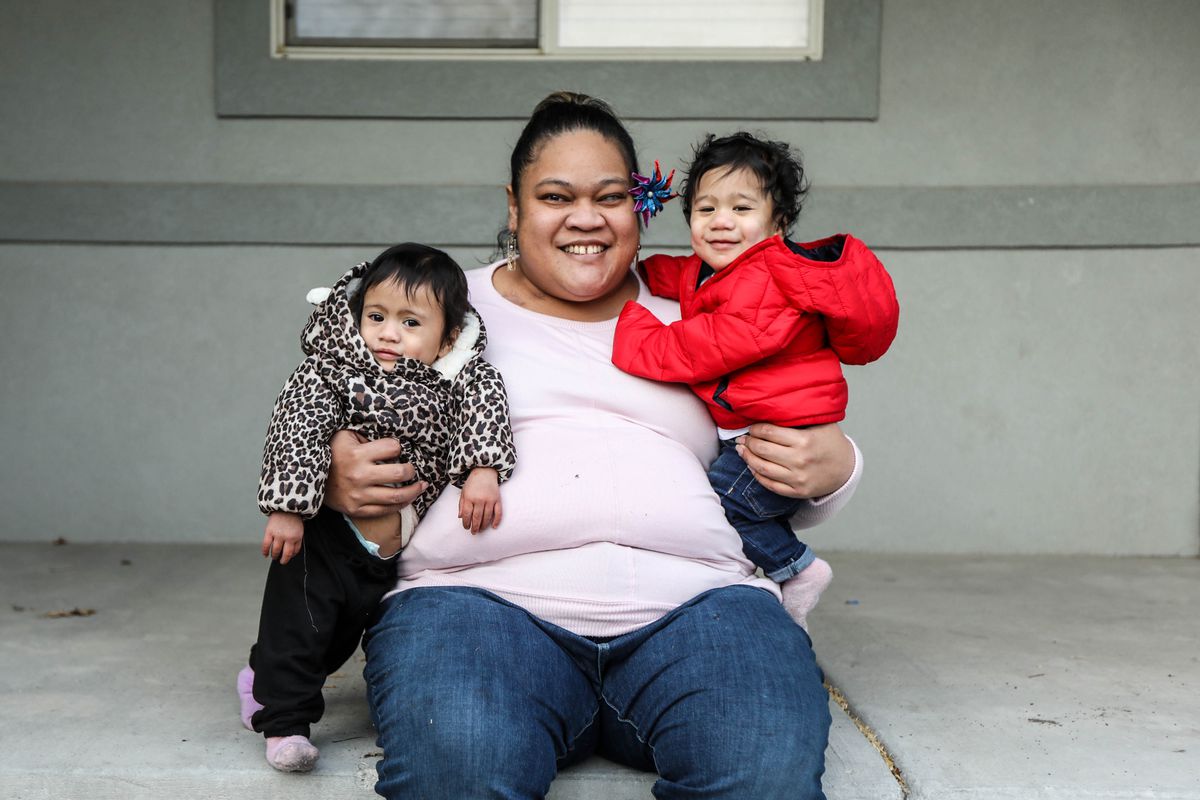 PROVO, Utah — Lorimay Fuimaono-Ki will not always have complicated feelings about Jan. 7.

But in 2021, it was a day of intense gratitude and searing pain.

The young mother cannot stop the tears as she tries to explain what life has been like since her country, American Samoa, a U.S. territory with a population of about 60,000 people, closed its borders to keep COVID-19 from ravaging the tiny string of Pacific Islands and atolls.

The decision — which was the same one island leaders made during the 1918 Influenza outbreak — kept the country coronavirus-free, but it’s cost people like Fuimaono-Ki in many ways, including precious time with relatives making due without them in their island home.

“Every day is a struggling day to know what’s going to happen with everybody dying left to right,” Fuimaono-Ki said. “I don’t want to be that child to be away from (my dad) and not be there for him in these kind of times.”

A sob forces her to stop and take a deep breath before she can continue.

“The real reason,” she said, tears streaming down her face, “is it was supposed to be him to come out (to the U.S.) to do his medical stuff. But due to the hospital finance and everything, they could only choose one to go, and my dad chose me to come and have my babies. … I think that’s what really gets me at times is that every day I hear from him, I know he’s trying to be strong for us.”

Just a few weeks ago, the newly elected governor promised to begin the repatriation process in February. But it is cumbersome and complicated, and it will likely take months for all residents to be able to return home. Residents will be asked to fly to Hawaii, where they will quarantine from between 10 and 14 days before being allowed to fly home. They will have to quarantine a similar length of time once they arrive in American Samoa, and among the challenges is finding places big enough to house those needing to quarantine if they come back as a group.

“Oh, I am more than excited,” said Fuimaono-Ki, admitting that even waiting another month feels difficult. “But I guess it’s going to take a while.”

The separation from their lives in American Samoa has been so painful that they formed Tagata Tutu Faatasi a Amerika Samoa, or TTFAAS. Loosely translated it means American Samoa stranded residents standing together, and it was an effort spearheaded by Aioevaga Tuna.

“This alliance started off with just conversations between people that were stranded here, and you know, it grew,” said Tuna. “We have stranded residents all across the states. We’ve been able to help each other, especially toward the end of last year, toward the holidays, like finding places for people to live, food and basic necessities, whatever they need.

But it’s also grown into emotional support, as the weeks stretched into months, some grew despondent over lost jobs, financial stresses and strains on familial relationships. The plight of American Samoan citizens is complicated because, unlike territories like Puerto Rico where residents are U.S. citizens, those in American Samoa are not U.S. citizens. They are U.S. nationals, which means they have some rights and benefits but not all of those enjoyed by citizens.

“The government did the shutdown in March to stop any COVID from coming in,” said Kenneth Kuaea, who is living with his sister in Provo after becoming stranded this summer. “But some people needed to get off the island as the months rolled on for medical reasons, and so the government chartered a Medicaid flight, and I came out on one of those.”

Kuaea said many of the stranded American Samoan citizens feel somewhat forgotten by their government, which made the alliance critical to their survival.

“We’ve only had ourselves to help ourselves,” he said. “For some it’s been a year that they’ve been unable to get home. … A lot of my brothers and sisters in the alliance have lost jobs back home, and they can’t find or get work here because of their immigration status as American Samoans.”

Kuaea said he and his wife had to shut down their call center business, Klaod Solutions, but they are now trying to “pivot and expand into other areas,” even as they wait for word about when they might be allowed to return home.

“There have been like eight or nine postponements,” he said, noting that at one point, people began flying back to Hawaii based on repatriation plans being announced, only to find out the plans had been delayed again.

“It’s been a huge burden financially, a huge toll psychologically and emotionally.”

Kuaea’s 16-year-old daughter flew to the U.S. with him in July and his wife joined them in October. But he said others have been stuck without family or support, and it’s been devastating for many.

“We’ve had a couple of individuals who’ve had a spouse or a parent die, and we can’t get back to bury them,” he said. “We’ve had individuals bouncing around from motel to motel because they don’t have family where their medical treatment is. We’ve had others staying in households with more than 10 people. It’s a burden on our families here and in American Samoa.”

The alliance has collected donations and distributed them to members who have needed financial support. Kuaea said the communities where some of them are stranded have stepped up to help them with food and groceries, and they’ve utilized a network of Polynesian-owned businesses that have helped sustain the stranded residents.

“We do wellness check-ins,” he said of the virtual meetings they have each week. “As despondency started to spread, one of our brothers opened up and said, ‘I’m grateful for this call. Guys, I feel like I’m not going to make it.’ He opened up and said he was contemplating ending his life.”

It turned out he was distraught that his wife and children were living in a house that likely couldn’t withstand the hurricane that was headed for the islands. After that, Kuaea and his wife, Louise, invited health care professionals to attend special “resilience workshop” calls so that “we can manage stress and give us tools to better manage the situations we’re in.”

Kuaea said being away from their homeland is “like there is a hole in your heart. Some piece of you is missing. You’re unable to be made whole until you get back to your homeland.”

Fuimaono-Ki’s yearning is excruciating because none of them knew when she got on that plane in November 2019 that a virus they’d never heard of would keep them apart for so many moments and milestones.

She gave birth to her premature twins on Jan. 7, 2020 — a day she calls one of the best in her life. But a year later, that day is tinged with longing and sadness as her “monkey and her princess” celebrated their first birthdays in an Orem Chinese restaurant without their father.

“We had a lot of plans for them today, but due to COVID and their dad and my dad not being here, we’re just doing a little get-together,” Fuimaono-Ki said. “I’ve been crying since New Year’s to today. I don’t think I have any more tears. It’s pretty hard, to the point where it’s stressing me out. … I am grateful they don’t understand yet, and I don’t have to explain things.”

How the Church Is Helping Vulnerable Women and Children in Utah