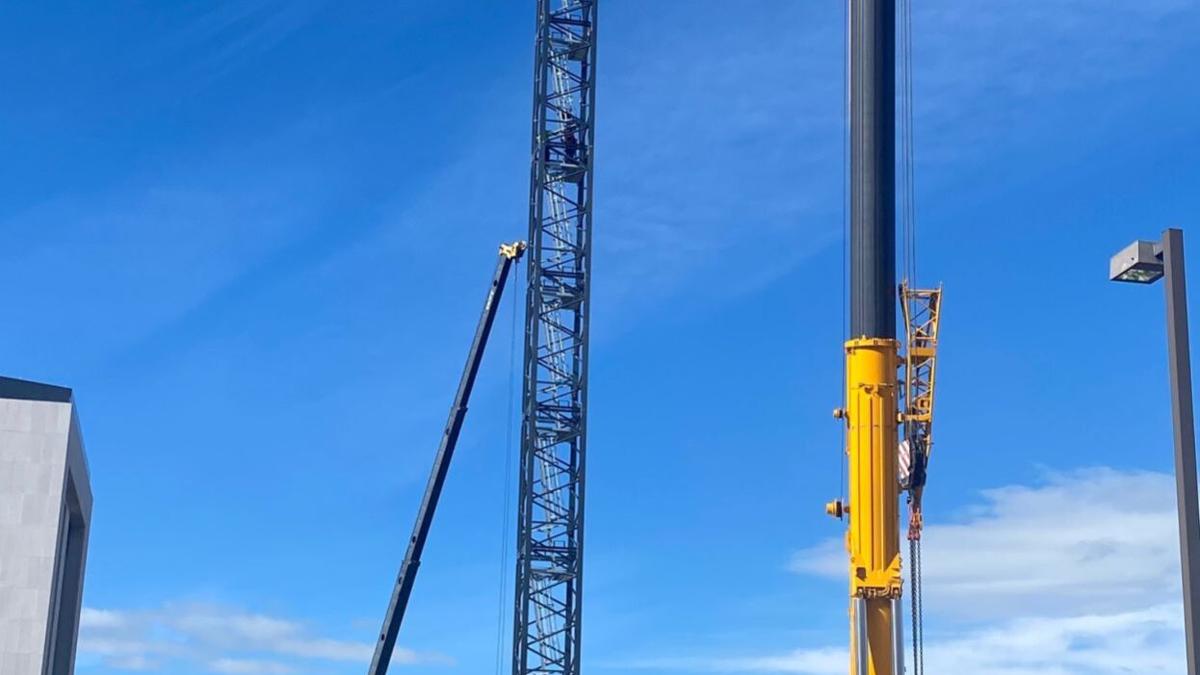 PROVO, Utah – Provo residents may notice a new look to the skyline around 100 West and 200 North.

Beginning this week, PEG Development has begun construction on Phase 1 of the Freedom Commons project that includes a large parking terrace, and upscale mixed-use retail and office spaces. It will house the headquarters for PEG.

According to Matt Hansen, vice president of development for PEG and the project manager for Freedom Commons, the first phase actually started with the building of the Hyatt Hotel on 100 North and Freedom Boulevard. It also will include the eight-story parking terrace with 654 parking stalls, and an office building.

It has been more than four years since PEG Developments announced it would build the Freedom Commons office complex.

In July 2020, the Provo Municipal Council was presented with a resolution for the chief executive officer of the city to sign a letter of intent indicating the city would lease space in one of the PEG buildings, yet to be built.

The resolution suggests the new office space will add to the vibrancy of downtown Provo. The resolution also notes the city has an obligation to provide 350 parking spaces for the Utah County Convention Center and PEG will build a parking structure to help the city with that obligation.

“The parking was a contentious issue,” Hansen said. “We wanted to be part of the solution.”

The terrace also will provide parking for the Mountainland Advanced Technology College, occupying the old 4th District Court Building, the Hyatt Hotel, the Commons and public parking. There also will be retail spaces on the north side of the parking terrace.

The width of 200 North between the terrace and the Commons will be narrowed, making it easy to close off for outdoor celebrations and festoon lighting, according to Hansen.

Large cranes were set up on Monday to begin the project that will first tackle the parking terrace. According to Provo city staff, it will be the largest terrace in the city.

It has taken several years of planning, zoning and entitling portions of four blocks in the downtown Provo area for PEG to begin construction.

“The purpose is to help PEG get over the funding threshold where there is very little risk to the city,” said Dave Walter, Redevelopment Agency director, during the July meeting.

Freedom Commons Phase I will encompass a six-story Class-A office building, street-front restaurant and retail space with plug-in access for food trucks, festival lighting, a large courtyard, more than 650 covered parking stalls and more, according to the developers.

Freedom Commons will have a sleek urban-green design, an exclusive gym available to those who work there, and stylish areas to collaborate outdoors, according to PEG.

Freedom Commons is being developed and designed to provide a good work-life balance, to promote healthy professional relationships and encourage creative thinking. At its core it is bringing the modern-day office to Provo, according to Hansen.

“With employment, housing, dining, entertainment and public transportation in close proximity, downtown Provo is the most walkable location in Utah County,” Hansen said.

“Our company has been located here for years, so we’ve been able to experience this firsthand – it’s great to walk to lunch rather than having to get in your car every time you want to do anything outside of the office. This new development will help build on the energy that has been created downtown and provide a new option for companies that want to be part of the growth that continues to push farther south into the valley,” Hansen added.

Freedom Commons is the result of a highly collaborative effort between PEG, Provo Redevelopment Agency, Utah County, and Provo City. A longtime investor in the Provo community, PEG developed the Hyatt Place Provo in 2018 and continues making progress on the I-Street Townhomes development currently under construction adjacent to Freedom Commons.

“Provo is a growing hotspot for innovative businesses. You look at highly successful companies like Nu Skin, Qualtrics, Novell and so many others that have chosen to locate their headquarters here, and it makes sense why,” said PEG CEO Cameron Gunter. “We have two top-performing universities in our backyard, we have a highly educated workforce and hard-working culture in general; plus, we have a relatively low cost of living, and all of those factors, together, create the ideal environment to build a successful business.”

The Freedom Commons development is located in a Qualified Opportunity Zone, one of 8,700 across the nation. This zone was established through the Tax Cuts and Jobs Act of 2017.

PEG, because it is putting its headquarters in Freedom Commons will be able to benefit from special tax advantages through the federal government.

“We want to give a thank you to everyone or their patience,” Hansen said. “It takes time to work agreements out.”

Hansen also wants the public to know that they are one of the few developers who aren’t officed in Salt Lake City. “Provo, this is our home.”

Currently, Okland Construction is starting work on the footings and foundations and raised the tower crane. Project leaders have a target completion of the first phase sometime in the Spring 2022.