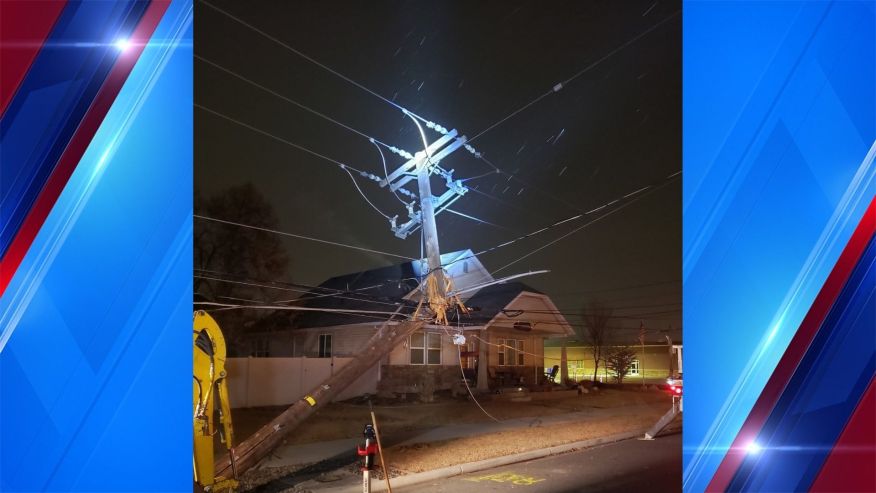 PROVO, Utah – A hardworking team from Provo Power worked for 12 hours to keep the community from losing power after a vehicle struck a power pole over the weekend.

Provo Power says they received reports of a car hitting the power pole on the evening of January 24.

Video shared on their Facebook page, which you can watch in the video player below, shows a car travel at what appears to be a high rate of speed on a sidewalk. The vehicle can be seen colliding with a power pole, which then snaps in half.

The attached power lines can then be seen bouncing up and down above two parked vehicles. None of the lines appear to break.

Photos posted to Provo Power’s Twitter account, seen below in this slideshow, show the extensive damage to the pole. A second photo shows the damage sustained by the vehicle.

Provo Power tells ABC4 that crews worked for 12 hours to repair the damage. During that time, not a single customer experienced an outage.

“To replace a pole and all of the connections it generally takes around four hours,” Provo Power tells ABC4. “Our crews were able to do the full demolition and repair even while the power lines were live. This is an amazing accomplishment and we are proud of the crews that were able to do such an in-depth job without any other issues or outages – let alone in the dark and in the cold.”

A spokesperson for Provo Power says over 2,000 customers could have lost power initially, but because the lines remained intact, there were no outages.

In total, eight crewmembers were on scene. Provo Power says they worked the lines which were hot, or energized, for 12 hours – from 6 a.m. to 6 p.m. While this sort of repair usually only takes a few hours, crews had to work slowly and more methodically through the night.

If this was a “normal” pole down situation (this pole specifically), initially there would have been 2,008 customers without power, and then because of our redundant lines (circuit loops coming from different substations) we would have been able to isolate the outage down to 8 customers. This is what is so miraculous about this particular instance is that there was not even a blink on the entire system.

In our CIP Budgets CIP (Capitol Improvement Planning), we plan for redundancy and resiliency on our grid making necessary upgrades and maintenance often to ensure that we have a backup loop for each circuit coming out of the sub stations. This is pivotal in our world for reliability and safety.

“This is an amazing accomplishment for our crews and one that isn’t done often in this type of situation,” Provo Power says.