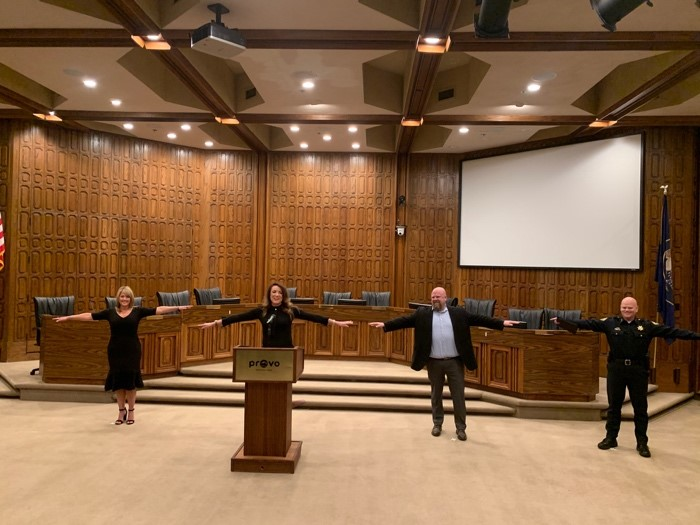 Mayor Kaufusi was joined by Chief Ferguson’s wife, Sally and the Utah Fraternal Order of Police President Brent Jex. The original planned gala needed to be cancelled due to the COVID-19 pandemic. During the ceremony, each attendee stood at least six feet apart from one another.

“Chief Ferguson is very humble and shy and doesn’t like attention,” said Mayor Kaufusi, “but this is the kind of honor that very few receive, and I won’t let COVID-19 take this special moment away from him, his family or our community.”

FOP President Brent Jex said the importance of this award is that Chief Ferguson was nominated for for the award by 4,000 officers across the State.

“This is such a well-deserved award given his unique abilities that make him a greatly admired chief throughout the State of Utah,” Jex said.

Chief Ferguson’s nomination form discussed his leadership in the handling the death of Joe Shinners. It states the following:

“Chief Richard Ferguson has always been a leader.  From his days in Major Crimes to rising through the ranks, he has always been a positive role model to those above him and below.  He has been a longtime member of the FOP. To watch his leadership when Joe was killed last year was remarkable.  He was there for us, cried with us, prayed with us, and made sure we were all ok, well as ok as we could be in that situation. For those reasons, I submit Chief Ferguson as FOP’s Chief of the Year.”