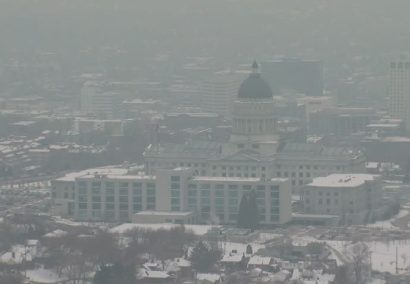 Utah– February is the 12th annual Clear the Air Challenge throughout Utah.

Since the challenge started in 2009, participants have helped make a big difference in improving Utah’s air quality.

According to officials with the Salt Lake Chamber, in the 12 years the challenge has taken place, participants have eliminated almost 1.2 million trips, saved more than 17 million miles, and reduced their emissions by more than 5 thousand tons.

The Clear the Air Challenge is a month-long competition that gives Utahns the chance to reduce their emissions by choosing alternative forms of transportation.

Why does Utah’s air quality matter?

“Utah’s air quality meets federal standards most of the year. In the winter, however, inversions can trap poor air quality in our valleys,” Jared Mendenhall, Public Information Officer for the Utah Department of Environmental Quality, tells ABC4.

A lot of this pollution comes from Utah cars. The Clear the Air Challenge encourages residents to reduce these tailpipe emissions through using healthy transportation alternatives like carpooling, teleworking, biking, combining multiple car trips into one, and using public transportation.

According to the Utah Department of Environmental Quality, in the winter, poor air quality is a result of fine particulate matter (PM2.5) pollution.

“Airborne particles are smaller than 2.5 micrometers. About 45% comes from car exhaust. Reducing this pollution is an important step in improving Utah’s air and protecting our health,” the Utah Department of Environmental Quality shares.

PM2.5 particles can become trapped in people’s lungs and bloodstream. In the past, they have been linked to a number of health conditions including aggravated asthma, decreased lung function, and increased respiratory symptoms such as coughing or difficulty breathing, the department states on their website.

Utah’s winter pollution can be troublesome because the natural geography of Northern Utah valleys is prone to thermal inversions.

Alana Brophy, Chief Meteorologist for ABC4, says the inversion in Cache Valley “sets up quickly because Cache Valley is nestled between the Wellsville Mountains and Bear River Mountain Range, which allows a layer of warm air to settle into the valley and act as a lid as it caps the colder air below it. Until a storm comes through, the cold air and pollution can’t escape.”

When an inversion occurs, pollution is trapped at the ground level where people live and breathe. According to The Utah Department of Environmental Quality, February is the month during which Utah often experiences the most inversions.

The Clean Air Challenge goal is to cut out as many car trips as possible.

Those wanting to participate in Utah’s Clear the Air Challenge can sign up through the Department of Environmental Quality’s website.