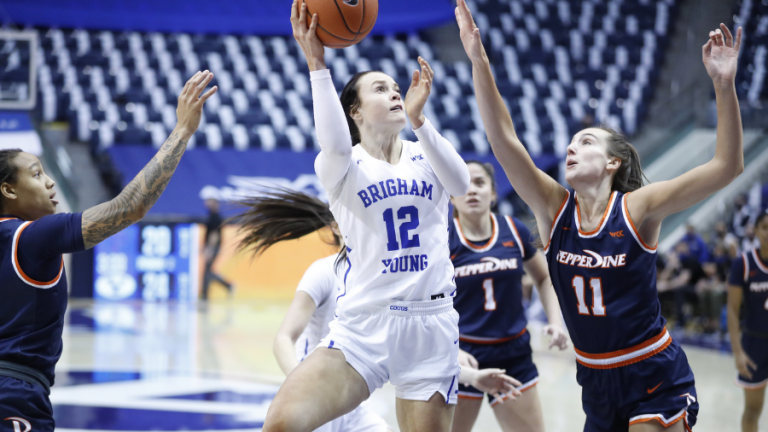 The Salt Lake Community College transfer from Salem pulled down a historic 20 rebounds. It’s the most rebounds by a BYU women’s basketball player at the Marriott Center since Tina Gunn grabbed 23 boards against Utah State during the 1979-80 season.

Gunn’s jersey hangs in the rafters at the Marriott Center.

Everyone knew Gustin was in for a special night by the time the second quarter hit. Gustin had a double-double in just 10 minutes of action. She finished the night with 27 points, 20 rebounds, and shot 12-17 from the field in 33 minutes of action.

“It was a fun night,” Gustin said. “I feel like we started out a little bit rough, but we pulled things together by the end and got the win.”

Every win is critical for BYU as they near the homestretch of the 2020-21 season. Entering Thursday, BYU was tabbed as the “last team in” in ESPN’s Bracketology for the upcoming NCAA Tournament. Historic performances are coming at the right time for a BYU team looking to get back to the dance for the first time since 2019.

After the 27-20 performance, Gustin is now averaging 12.8 points and 13.8 rebounds per game on the season. Her 13.8 boards every night is good for second nationally. She’s also 24th nationally in double-doubles on the season with seven.

Along with Gustin, sophomore standout Shaylee Gonzales scored 11 points on an uncharacteristic 5-20 from the field. But she made her impact felt in other ways, pulling down eight rebounds of her own and dishing out four assists, which was good for a plus/minus of plus-27—a game-high between both teams.

BYU outrebounded the Waves 45-34 in the conference win that moves BYU to 10-3 overall on the year and 6-2 in West Coast Conference play. The Cougars are back in action on Saturday afternoon as they host Loyola Marymount at 2 p.m. on BYUtv.