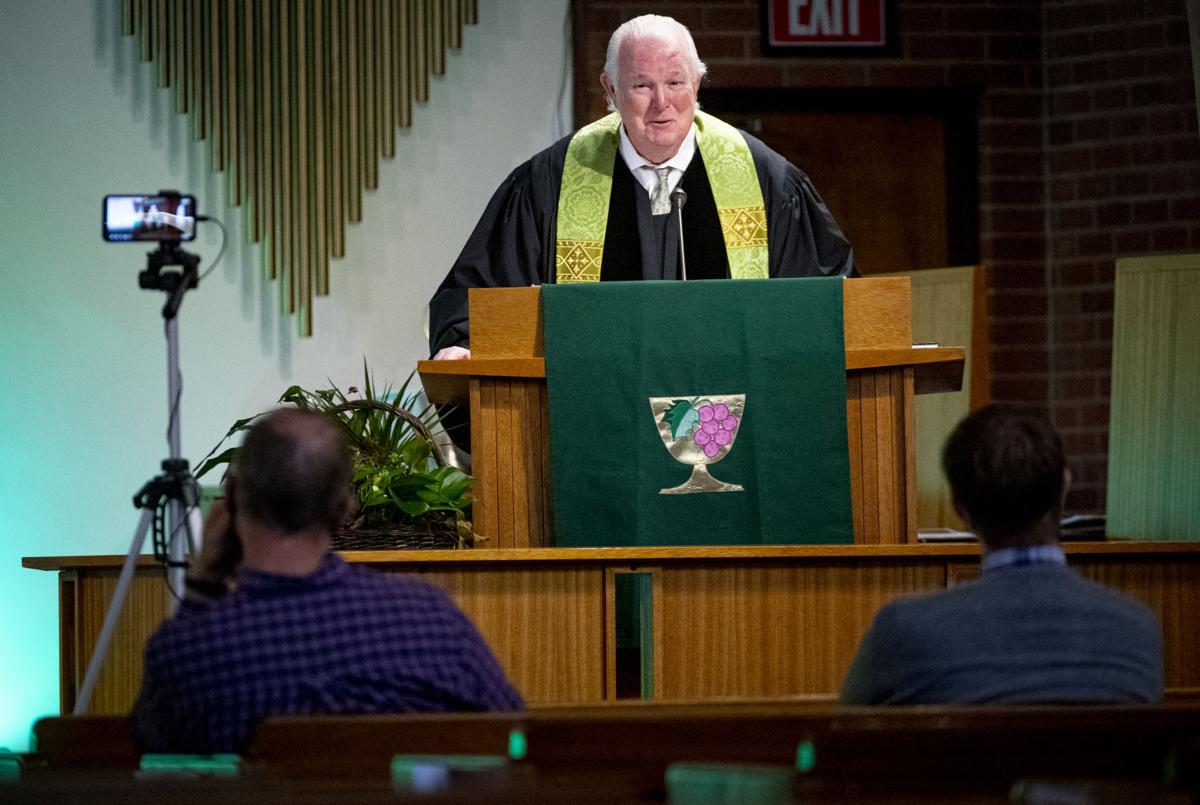 PROVO, Utah – A young child’s finger play, a generation or two back, had you interlock your fingers while keeping the pointer finger up and touching. This was the church house and the steeple.

The game continued as you opened your hands while saying “open the door and see all the people” while wiggling your fingers.

Churches today may not be so apt to teach that children’s game. As the doors to many are closing, the buildings and congregations becoming memories in communities throughout the world.

That is why the Provo Community Congregational United Church of Christ is working so hard to keep its people, its memories and its church from fading away and leaving Provo with just a memory.

Known better as Provo’s downtown community church, this A-frame, mid-century architecture is prominent on University Avenue and 200 North. Connected to that A-frame are parts of the church’s historical self, and it, as well as the rest of the church, is needing a great renovation.

A group of hardworking professionals — from preservationists to marketing analysts — are moving toward the day when they hope to see a plaque on the wall, signifying it is on the National Register of Historic Places.

If granted that honor, it would give the church more recognition and opportunity for grants that could help upgrade and preserve the church, according to David Amott with Preservation Utah.

“Particularly, funding from the Partnership for Sacred Places based in Philadelphia,” Amott said. “It gives grants to congregations who have buildings in need of repairs.”

Those grants are not just for the buildings or the services in them but also for the things the church does for the community, Amott said.

The process to get on the National Register is tedious but important. By sometime in March, church officials must have all letters and the initial application sent off.

Amott said their letter will join others, hundreds of them. The national committee picks a handful of those, and then, the process continues to the final application. After that is done, sometime in August, the decisions are made, and officials will wait to see if their place has been selected.

The applications, according to Amott, must show its multiple uses in the community, its historic nature and more.

For Provo’s Community Congregational Church, that history reaches back about 130 years and to a young school teacher, Emily Clapp.

A bit of historyShe came to the Wild West to provide children with an education, but what young Clapp didn’t know is how long her influence would remain in Provo.

According to church history, Clapp was sent to Provo by the New West Educational Commission. The commission was concerned with the lack of formalized education in Utah, and Clapp was sent to establish a free public school.

“As well as teaching regular academic classes, Clapp was also expected to set up a Sunday school,” said Dave Lewis, public affairs and building liaison for the Provo church.

“Ministers were soon sent for the Sunday school,” Lewis added. “Due to increasing student numbers, a new building was built and named the Proctor Academy.”

The Proctor Academy closed in 1919 as Utah had started opening its own public school system.

That same year, all Methodist and Baptist churches — as well as congregations of different denominations — in Provo came together to form the Provo Community Congregational Church, which is now one of the congregations in the United Church of Christ, focusing on community, youth programs and activities, Lewis said.

According to Provo history, the downtown location was considered a controversial move that placed a church in a business district.

As is the story from many faiths in the area, their congregations grew when U.S. Steel Works Geneva Plant opened near the end of World War II.

The Community Church’s congregation grew practically overnight, and the need for a new chapel and gathering place was answered with the building of the current A-frame chapel in 1955.

A piece of Provo Over the years, the church and congregation have reached out to the community and offered to have meetings, group functions and celebrations at the church.

From Boy Scout Troop meetings and Alcoholics Anonymous, to choirs practicing and special community programs, the Provo Community Church continues to reach out.

According to Lewis, that is one of the reasons they want to refresh and renovate the church. After the Provo Tabernacle burned 10 years ago, there were few places to have community concerts and productions.

The Community Congregational Church would like to do that, Lewis said.

One of the greatest successes in Provo, that helps the vulnerable and homeless, is the Food and Care Coalition. That organization found its first home at the Community church.

Isaac Paxman, deputy mayor of Provo, heads the committee and is hoping to raise donations for the initial $2 million dollars that is needed to take care of deteriorating stucco, the roof and other things on the outside of the church and then start on the inside.

“The church has been woven into the story of my extended family for many years,” Paxman said. “My grandparents (Shirley and Monroe Paxman) started a little gathering call Carols by Candlelight in their home over 40 years ago. When it came time to move to a bigger place, this was the church that agreed to host them.”

Up until the 2020 pandemic, the Carols by Candlelight event has been a greatly attended community activity to start the Christmas holidays.

“And, it’s been a great partnership,” Paxman said. “I remember attending there even back when my wife and I were just dating and that’s been more than two decades ago now.”

Paxman added the church is also a symbol of the diversity of faiths that have long been here in Provo.

“Like me, my grandparents were lifelong members of the most common faith in the area, The Church of Jesus Christ of Latter-day Saints,” Paxman said. “But, perhaps earlier than most, they grasped that other faiths or different-looking churches were not something to fear but rather are an important part of the community.”

In fact, they like to tell people there first date was to an evening Catholic Mass. Grandpa always inserted it was free, Paxman noted.

“They weren’t afraid to step into another church’s building,” he said.

There are about 50 regular attending members of the Provo Community church congregation at present, Lewis said, but the building is used for many other groups and organizations.