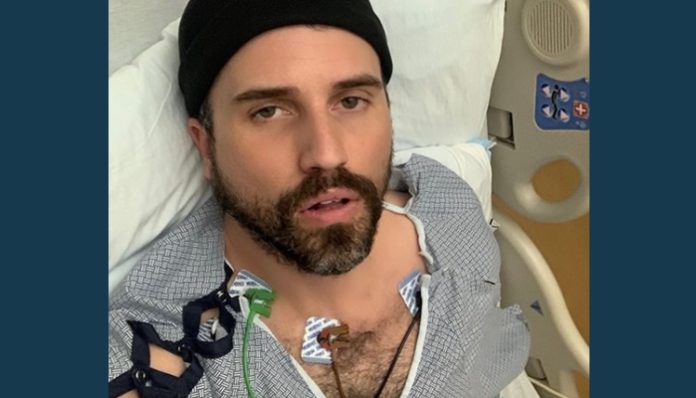 PROVO, Utah — The frontman of the Provo-founded band Neon Trees, Tyler Glenn, has been hospitalized in Utah after suffering a stroke.

Glenn wrote on Instagram Monday: “Hey everyone, I have some freaky news. Last week, I suffered a stroke that resulted in a retina occlusion in my right eye. I woke up Thursday foggy and not seeing clearly out of my right eye. Something resembling a grayish cloud was obstructing my vision.

“Unfortunately I waited the day to see if it would improve, Googling my symptoms til I spiraled from possibilities. The next morning, still having the vision problem, I went to see an ophthalmologist who alerted me to the retinal edema in the small artery of my eye. It wasn’t just an eye floater like I’d presumed and hoped. He informed me I had had a stroke, and that I should immediately go to the hospital.”

Glenn was admitted to Intermountain Medical Center in Murray.

“There I was admitted and began a series of tests, every cardiology and neurological test they could do, my last test being this morning,” the post continued. “I’m quite freaked out being 36, ostensibly healthy and having this happen. I’m still awaiting reasons why, although my labs and the results show a clean bill of health in my heart and blood. I still have the ‘cloud’ in my right eye, which I’m told could eventually dissipate, or my eyes could adapt.

“I’m grateful for my Mom, who was able to be by my side for this scary ordeal. Hospitals are no fun, and sadly these things can often happen with no warning. I appreciate the love and support, and hope I can at least get an answer as to why this occurred. If you ever feel or experience something in your body that feels off, please don’t wait to get it checked out. You always assume it can’t happen to you, until it does. X Tyler.”

Neon Trees was founded in Provo in 2005 and received nationwide exposure in late 2008 when the band opened several North American tour dates for The Killers. Glenn is the co-founder of the LOVELOUD music festival, the proceeds of which benefit local and national LGBTQ+ charities, that held its first event in 2017.

Victims of fatal crash on I-15 in Provo identified