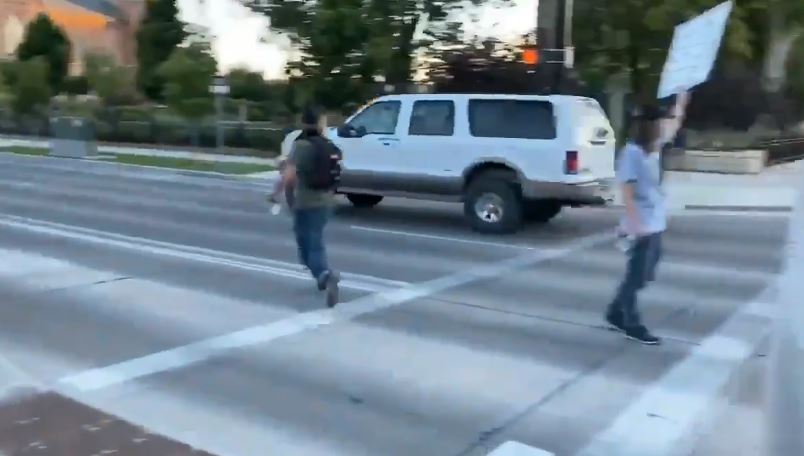 PROVO, Utah — Two people were arrested Tuesday night in connection with the shooting of a motorist during a protest near the Provo Police Department the night before.

The victim, a 60-year-old Provo resident, remained hospitalized Tuesday but was “stable,” according to police. The man was not part of the protest or counterprotest that had been going on, but was just driving in the area, said Provo Police Sgt. Nisha King.

Tuesday night, King confirmed two people had been arrested in connection with the shooting. Jesse Taggart, 33, of Salt Lake City, was arrested for investigation of attempted aggravated murder, King said. He also faces allegations of aggravated assault causing serious bodily injury, rioting, threatening use of a weapon in a fight, criminal mischief and firing a weapon near a highway.

Samantha Darling, 27, of Ogden, was arrested for investigation of obstruction of justice and rioting.

Both were being booked into Utah County Jail.

“We definitely want to extend our appreciation and our thanks to all the citizens who provided evidence and testimony to our investigators,” King said. She also thanked Salt Lake and Ogden police for their assistance.

Police also confirmed Tuesday they were still looking for a second gunman who is believed to have brandished his weapon and pointed it at the driver but did not fire.

The victim was driving a white SUV on University Avenue and was attempting to turn onto Center Street when a group of protesters began “crowding around the vehicle. A male protester ran to the SUV on the passenger side, pointed a handgun at (the) driver and shot one round through the window,” according to a synopsis of the incident by Provo Deputy Police Chief John Geyerman.

The driver, who was struck by a bullet, “hit the gas trying to leave the situation,” Geyerman said.

Cellphone video recorded by witnesses (warning: explicit content) shows the SUV appearing to push through the protesters, with at least one person falling to the ground.

As the SUV is speeding away, the gunman ran after the vehicle and fired a second round that went through the rear passenger window, according to police.

After the shooting, video shows the gunman then “conceals the firearm and continues to protest,” Geyerman said. “This same protester later approached another vehicle at 500 North and University Avenue, striking and breaking the window with the handgun.”

“Peaceful protests are a fundamental right and often can become an important catalyst for positive change. Criminal acts and violence such as we saw last night in Provo were anything but peaceful and are unacceptable,” she said.

On Monday, a group calling itself Back to Blue planned to drive around the Provo Police Department and honk their horns to show support for law enforcement.

Another group planned a counterprotest at the same time and place. On Facebook, their event page was originally titled End Police Brutality but was later changed to Marching for Racial Equality. The Facebook pages list the event’s hosts as the groups Insurgence, Solidarity for Justice, Salt Lake Equal Rights Movement and the Salt Lake Antifascist Coalition.

“The growing movement against racist policing tactics and police killings has transformed the U.S. political terrain and brought much-needed attention to police brutality that is endemic in the U.S. At the heart of this movement is a rallying cry for justice for the victims of this violent system that disproportionately targets black, brown and indigenous peoples,” the Facebook event states.

About 100 people had gathered on Center Street about 6:30 p.m. Monday to protest. The event remained peaceful until about 8:40 p.m. when the shooting and a hit-and-run were reported.

On Tuesday, Provo police requested cellphone videos of the incident from witnesses.

“We are grateful for the photos and videos we’ve received and we are following all leads. If anyone has video or photos of the incident at Center Street and University Avenue, please contact detective Patterson at [email protected],” police said in a statement.

Video shot by KSL-TV recorded what appears to be a man with his face concealed pointing a handgun at the SUV on the passenger side of the vehicle. The “popping” sound of shots being fired can be heard in the video.

Tuesday afternoon, pictures surfaced on social media of a second man holding a gun near the driver’s side window of the SUV and also holding a gun in the middle of the street as the victim drove away. As of Tuesday night, Provo police were still working to identify that man. King said investigators do not believe that man fired his gun.

About 50 minutes after the shooting, tensions remained high as cars continued to drive through the lines of protesters, prompting some to jump onto the vehicles and hit the windows. Demonstrators marched to the Provo Police Department and were met with officers in riot gear. Amid calls to disperse and threats of arrest from police, protesters chanted, “Hands up, don’t shoot.”

By 10 p.m., most of the crowd had dispersed after a woman with a megaphone, who was one of the organizers of the protest, told everyone to go home.

King Tuesday night emphasized the investigation into incidents during the protest is not over, saying “we do want to urge people with information of anyone who was involved in damage to other vehicles to still please contact detective Nick Patterson.”