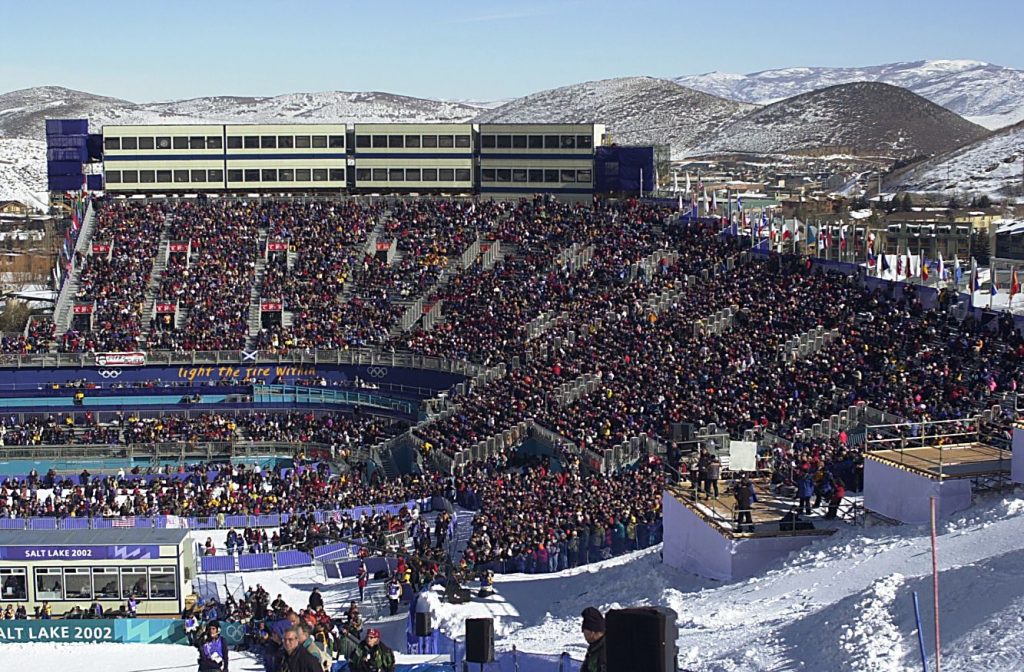 PROVO, Utah – Crowds from across the globe could be gathering at Park City Mountain Resort in February of 2030, the month the Winter Olympics may be staged in Salt Lake City, Park City and other places in the region.

PCMR is seen as a key competition venue in the concept map for a second Olympics, which locates freestyle skiing and snowboarding events on the slopes overlooking the resort’s parking lots.

But in the less than 10 years before the Games of 2030, there are expected to be major changes at the base of PCMR. A Provo firm intends to acquire the PCMR parking lots from resort owner Vail Resorts for a large development stretching through the upper and lower lots. PEG Companies and the Park City Planning Commission are engaged in discussions about the proposal with a vote expected in coming months. If the proposal is approved, it is likely much of the project will have been built by the time of the opening ceremonies of the Olympics in 2030.

In an intriguing sidebar to the overall Planning Commission talks, the developer recently mentioned a Games in the context of the project. Park City’s elected leaders have discussed the prospects of a second Olympics, and Mayor Andy Beerman is a member of the Salt Lake City-Utah Committee for the Games, but the Olympics have rarely been mentioned at the Planning Commission level since the 2002 Winter Olympics era. The United States Olympic & Paralympic Committee in 2018 selected Salt Lake City as the American bid city for a future Winter Olympics, possibly as early as 2030.

PEG Companies noted the Olympics in a set of prepared written responses to comments made by the public. One of the public comments dealt with the possibility of construction starting on the project but then not reaching completion.

“PEG does not foresee any issues that would prevent this multi-phased project from being completed. It is critical for the community, ski mountain operations and the potential of Utah hosting an upcoming Winter Olympics that a revitalized base area comes to fruition,” a written response, submitted by PEG Companies, said.

It did not provide details about what PEG Companies considers to be the critical nature of the project to a Games. The lots that would be developed, though, cover land that was important to the operations of the competition venue at PCMR during the Games in 2002. Much of the support for the venue was staged in the lower lots, just off the slopes where skiing and snowboarding events were held within a giant temporary stadium.

Although the Salt Lake City-Utah Committee for the Games has identified a concept map of the venues, the detailed blueprints for the various locations would not be crafted until after an Olympics is secured.

The PEG Companies proposal involves residences, commercial square footage and parking and transportation infrastructure. The spaces in the parking lots that would be lost to the development would be replaced with large garages. The parking lots that offered so much flexibility to the planners of the Games in 2002 would effectively be unavailable for a second Games if the project is developed as envisioned.

PEG Companies provided prepared answers to a series of Park Record questions regarding the mention of an Olympics in the firm’s recent written response. PEG Companies indicated it has not been involved in discussions with the Olympic committee in the state regarding the project and a Games.

The prepared answers provided to The Park Record seemed to retreat to a degree from the assertion that was made regarding the project’s criticalness to a Games. In one of the answers, the firm broadly addressed what it considers to be some of the benefits of the project.

“It is critical first and foremost for the Park City community because of the workforce and locals’ housing we’re proposing on-site, traffic and transit enhancements, structured day skier parking and public ski lockers. In addition, a world-class ski mountain like Park City Mountain deserves a complementary world-class resort base – today, tomorrow and if Utah secures the Olympics,” PEG Companies said.

In response to a question about the role a project could play in a Games, such as providing space or lodging for the Olympic family, athletes and crowds, as well as the transportation infrastructure, PEG Companies said the “priority right now is working with our residential neighbors and commercial partners in addition to Park City Municipal to ensure the right project for the community is approved and built.”

The firm also said the construction timeline would be determined after development approvals are granted. PEG Companies said a seven-year construction schedule is projected. The seven-year projection appears to put a completion date at about the time of the Games in 2030, depending on the Planning Commission process and other variables.

The PEG Companies proposal is based on an overall development approval for the PCMR base area that dates to the 1990s, during the era preceding the Winter Olympics of 2002. The buildings put up as Marriott’s MountainSide and the Legacy Lodge were also involved in the 1990s approval. Both were built prior to the Games of 2002.

The PEG Companies noting of an Olympics was at least the second time a Games has been mentioned with regard to the PCMR development proposal. In Planning Commission testimony in the summer, Rich Wyman, a longtime development watchdog, criticized the proposal and mentioned the idea that another Winter Olympics could be awarded to the state. His comments to the Planning Commission included a statement that “with Park City trying to get the Olympics again, I think Park City should be looking at creating something that is absolutely world class. And I’m not sure PEG is the company that can even do it, to be quite honest . . . I would suggest that PEG perhaps brings in some people with experience on the world stage.”