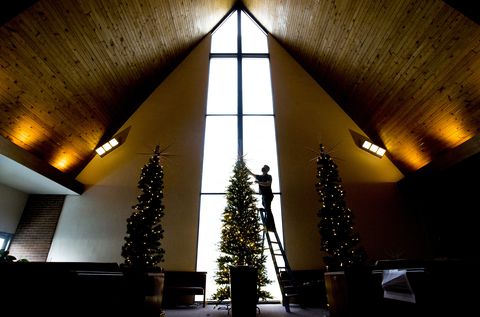 One year later, people of various faiths are collaborating, donating time and expertise to raise upwards of $2 million to restore the historic church and establish it as a community gathering place, promoting unity in the process.

“We have some wonderful persons who have been nudged by God to join us who are members of other denominations,” said the Rev. Cupples, the pulpit supply pastor for the Provo congregation. “As we help each other, this becomes more than just a building.”

The “Keeping the Faith in Downtown Provo” fundraising campaign to restore the church, located at 175 N. University Avenue in Provo, started in February and will continue until February 2022. So far the campaign has received about $80,000, the Rev. Cupples said.

Organizers emphasized that all donations are for the building’s restoration, not general church use.

Depending on how much money is raised, organizers hope to replace the 100-year-old tile roof, repair the the building’s exterior and add a new pipe organ, among many other needs and improvements.

Before it burned down in 2010, the Provo Tabernacle served as a large center for community activities. When it was rebuilt into the 150th temple of The Church of Jesus Christ of Latter-day Saints, a need for a new community gathering place arose. The Provo Community Congregational United Church of Christ, about three blocks from the temple, was identified as a place where people of all faiths are welcome, but it needs a major upgrade, the Rev. Cupples said.

“This building needs to be renovated. It’s in terrible disrepair,” he said. “But this is more than a renovation project, this is a God project, a spiritual project in concert with others. We want to continue to erase the lines that say we’re competitors as different Christian denominations.”

For decades, the church has been home to Easter and Holy Week community interfaith services, as well as Messiah sing-alongs.

In addition to religious worship services, the church has accommodated various community events, such as Boy Scout troop meetings, plays, recitals, concerts, addiction support groups and more over the years.

Of the more than 20 people or so helping to organize the restoration effort, Isaac Paxman, Provo’s deputy mayor, is one of several Latter-day Saints volunteering on the service project. More than 40 years ago his grandparents started the longstanding tradition of Carols by Candlelight. In fact, Paxman’s first visit to the church happened when he took his future wife on a date to Carols by Candlelight.

How can you have movie-theater popcorn without the guilt? When it has “butter but better”!