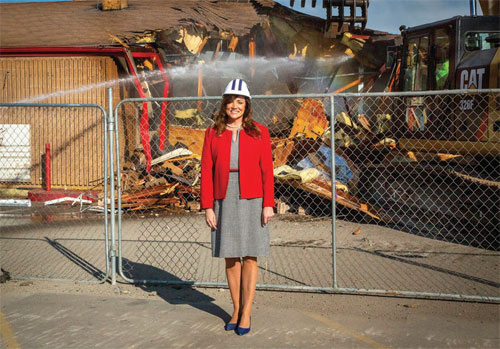 PROVO, Utah – As mayor of Provo, I feel it’s important to keep my eyes on the future. Yes, we have needs today, but my vision is focused on the horizon forty years out and beyond. I try to imagine life in this valley then and strive to make the right decisions now for our children and grandchildren. It’s my mission to do right by our current and future citizens, businesses and other institutions, for the long-term good of all of us. With that in mind, here is a sampling of the exciting projects we have underway:

Our existing city center, built in 1972, is not seismically sound, nor does it meet the needs of our growing community. We’re grateful that our voters recognized the need and approved the Police, Fire and City Facilities Bond in November 2018, authorizing the city to build the new Provo City Center. The new164,000-square-foot building, located at the corner of Center Street and 500 West, will anchor our downtown, improve operational efficiencies and streamline the citizen’s experience.

Airport Terminal for the Future

As the state legislative session was about to open last year, no one in our city organization, the county or the legislature had a major airport terminal for Provo in mind. Sure, it was in our long-range plans. Ten or 20 years from now, we’d find the money. But under my leadership, an idea took flight: what if we sought funding now? Soon, with my talented team, I was presenting to legislators and county commissioners.

We recognized that few investments could benefit so many residents of this valley and surrounding areas, as much as an investment in our airport. It will be an economic development driver, a convenience provider and a destination maker for Utah County. Our county is the center of Utah’s growth. In coming decades our population is projected to rival that of Salt Lake Valley. We have our state’s two largest universities. We have Silicon Slopes. We have Sundance and a host of other fine institutions here in our midst. The terminal will benefit families and institutions in ways we can hardly foresee.

Our timing was right. When we mentioned the project to a state senator, he said the hair on his arms stood up. By the end of the legislative session, we had $9 million from the state and $4.3 million from the county. Add in several million we were awarded from the federal government and we were ready to go. We broke ground on the project last November and are well on our way to building a first-class aviation project to serve industry and business and provide a convenient alternative to citizens.

Stimulating the Economic Engine of Development

Both before and shortly after becoming mayor, I don’t know that any complaint came up more than this: getting a construction project done through Provo City was a nightmare. I heard this from voices as diverse as residents looking to change their driveway to companies trying to build a new office building.

I chose to take a deep dive into the problem. After hundreds of hours on the topic, I decided the time had come for a monumental change.

Adopting best practices from around the state and beyond, a new department was born: our Department of Development Services. Central to the reform is this: Anyone proposing a project can meet with a committee of city department heads and engineers, with the new department’s director empowered to resolve disagreements among city representatives right there on the spot. The committee generally convenes twice a week, so your wait for a face-to-face should never be long. And I’ve made it clear that the city can’t continually come back to you with new changes. If we’ve reviewed your project and approved it, only the rarest of circumstances should warrant a change in requirements from the city.

Importantly, none of this is designed to lower Provo’s standards. If your project doesn’t fit within established guidelines for your neighborhood, you can expect a swift “no.” But when it comes to building projects, a swift “no” is a thousand times better than “no” after 10 months of uncertainty. Of course, most often the answer should be “yes.”

One of the first meetings I had as mayor was with our wastewater (or, in other words,  sewage) management team. Our 1950s-era treatment facility was tired and in need of major work — as in $60 million of work, just to make it a good 1950s-era facility again. Without an upgrade, we were staring down millions in ongoing penalties for noncompliance with environmental regulations.

After careful study, and at the urging of those working closest on this issue, including an outside consultant, I decided to act. In time, I was standing before a state panel seeking funding in a highly competitive process. The result: a $77.8 million loan that will help us take our wastewater plant into the next generation. The terms are incredible: $2 million of principal forgiveness and a one-half-of-one-percent interest rate. As a result, we’ll be sending cleaner water to Utah Lake for decades to come, through the state-of-the-art facility we are now designing.