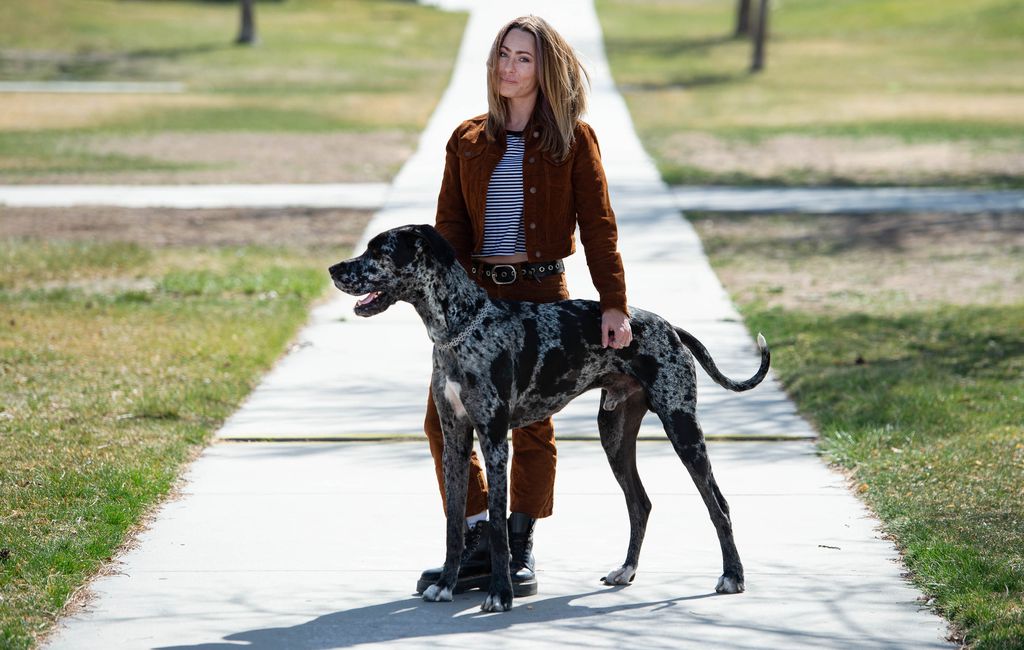 Utah – The voices Cheryl Megarry-Strieby heard in her head were clear and insistent: she had to get out of her apartment. It had to be right then, otherwise she would die and people in Tooele would die. So she fled — nude, frightened and in the grip of a psychotic episode.

She was picked up and taken to St. Mark’s Hospital to be stabilized.

In the hospital’s psychiatric ward, the 66-year old was able to get a message back to her landlord and let her know where she was and ask that someone please feed Cocoa Puff, her pet Siamese cat.

Discharged several days later, Megarry-Strieby returned home to find she had been evicted. She had missed her payment while in the hospital.

Then she learned that her apartment manager had tried to remove her cat from the unit, and Cocoa Puff had jumped out of the manager’s arms into the street where she was hit by a car and killed.

“It broke my heart,” she said. “Losing my housing and my cat. [Cocoa Puff] was just playful and happy … she made my life happy.”

Megarry-Strieby tried to contest the eviction, but without success as she argued against the apartment attorneys from the Law Offices of Kirk Cullimore.

The firm is the state leader in evictions and its founder and namesake claims credit for writing Utah’s landlord-friendly eviction laws and whose son, a partner in the firm, is a Republican leader in the state Senate.

Megarry-Strieby was allowed to collect a few personal belongings but lost her Section 8 housing voucher, meaning she would not have subsidized assistance for a new apartment. She moved in with family and in August 2020 received a $6,149 judgment against her, including $996 in attorney fees to the Cullimore firm.

“I don’t want them to know where I live or they’ll come cut my hair off and take that for payment,” she said.

Megarry-Strieby was unaware at the time that under the Federal Fair Housing Act she had the right to request a reasonable accommodation to allow her to pay rent a few days late because of her mental health crisis.

She did call her landlord from the hospital explaining where she was, why, and making the request to care for Cocoa Puff. However she didn’t say the specific words, “reasonable accommodation” in her request.

What’s also troubling is that the Cullimore firm knew very well where she was and proceeded with eviction anyway. The eviction complaint that Cullimore filed in court included a handwritten note: “D is at St Mark’s hospital psych unit.” When asked by a reporter if this was a violation of federal law, and whether the note showed knowledge of the violation, the firm declined to comment.

The Cullimore firm has dealt with hundreds of reasonable accommodation complaints. The firm’s founder, Cullimore senior, in 2019 estimated his clients face 120 such complaints a year in Utah. The firm itself is also the subject of a federal discrimination lawsuit for allegedly seeking to discourage a Utah renter from having her emotional support animal.

Therapeutic benefit of support animals is ‘so real’

Nick Jackson is an attorney with the Utah Disability Law Center, which, as the name indicates, fights in court for the civil rights of disabled Utahns.

Jackson said not many renters know their rights, or, if they do, they fear retaliation if they attempt to up to landlords.

“Having to ask for the landlord to go out of their way to grant you one of your civil rights is not easy when there’s a lack of housing that you can afford and your landlord can hold lease violations over your head,” Jackson said.

Jackson said he sees the most problems related to emotional support animals. This is an area of the law where the Cullimore firm has an outsized influence, not only in Utah, but nationally.

It was in 2015 when Kaylee Conlin woke up in her Salt Lake City basement apartment to the sound of running water.

“I get out of bed, I put my feet down and it’s sopping wet,” Conlin recalled.

Her apartment had flooded — for the second time.

“He calls me back a little while later and tells me I’m going to be evicted because I have a dog in the apartment and I have three days to get out,” Conlin said.

She was shocked. Apartment managers had seen her support animal, a Great Dane named Buckley, multiple times before and never mentioned it.

Buckley was more than just a good pet, he was her big gray-spotted guardian and fully-trained support animal. Conlin relied on him while living alone after grappling with the recent deaths of two close friends, and also from a rare digestive problem that would often leave her bedridden and anxious.

“I know people gasp at the ‘emotional support’ thing but it is so real,” Conlin said.

Facing eviction, Conlin was hysterical, but luckily found a lawyer who helped her take legal action against the apartment and the Cullimore firm.

While Conlin settled the case against her landlord, she continued her court action against the Cullimore firm.

When she tried to get into new housing she unfortunately ended up at another of the thousands of Cullimore-represented apartments and got more pushback when she asked for a reasonable accommodation for Buckley.

She was told that the apartment’s form had been approved by the U.S. Department of Housing and Urban Development, and that the Cullimore firm was “the best in the state,” according to court documents.

Conlin’s 2018 complaint states that the firm misrepresented to clients that its “emotional support animal” approval forms were approved by HUD in official conciliation agreements — settlements arising from disability related complaints.

Cullimore seemed to be sending that very message in a National Apartment Association conference in Atlanta in 2017 where he was a featured speaker on the topic of emotional support animals.

At one point he said student housing was “an absolute plague” on the rental industry and spoke of a large student complex he represented in which he claimed 30% of 300 units had assistance animals.

“I mean, you send your kids off to college in hope that they’re going to grow up [and] not take their doll with them,” Cullimore said to chuckles from the audience.

Cullimore began the presentation discussing the prevalence of fraudulent support animal requests, although he had no data to back up the claims.

“Even though we don’t have any statistics, we believe it’s 70-80%” Cullimore said.

He told landlords to call doctors directly to verify the request forms and to “educate the medical providers on what they’re doing to us as an industry by signing these forms.”

He even explained the value of warning doctors that such verification requests should be expected every time they signed a letter supporting a support animal claim and would take time away from their practice.

“When we call and do the verification and the doctor says ‘I don’t have time to do this,’ [then] you say ‘Well I appreciate that, but this is part of the process we have to go through and, by the way, every time you sign one, you’re going to have to do this,’” Cullimore said. “Then they think twice about having to sign the forms.”

In a 2019 deposition, Cullimore was pressed about statistics of renters lying about their need for support animals. Cullimore couldn’t think of any but remembered reading a study about how many people in the United States had mental illness.

“I can’t remember where I read the study, it was 10 years ago,” Cullimore said.

While Cullimore hadn’t seen data in a decade, an October 2020 report from Mental Health America painted a clear and disturbing picture: 24% of adults with a mental illness report an unmet need for treatment. The number hasn’t declined since 2011.

The same report noted that 60% of youth with depression do not receive any mental health treatment. The report ranked Utah poorly — 48th in the nation for having both a high prevalence of mental illness as well as some of the nation’s lowest rates of access to care.

Cullimore was also challenged about presenting the “assistance animal” forms he provided through the apartment association to landlords around the country as being approved by HUD. Cullimore acknowledged at the 2017 Atlanta conference that HUD wouldn’t give a “stamp” of approval to any form but added that “by signing off on these conciliation agreements it has the effect of their approval.”

Jackson of the Disability Law Center has challenged Cullimore before on claiming HUD approval for the forms, noting that HUD doesn’t even investigate claims that are resolved by conciliation.

“It’s not an objective measure of what the law says or who is right and who is wrong,” Jackson said, noting these settlements for very specific cases so as to avoid the need for a trial.

Jackson believes unaffordability of mental health treatment, not fraud, may be driving the increase in support animal requests. He says many people, especially veterans with post-traumatic stress disorder, might not be able to afford frequent therapy sessions and decide instead with their health care provider to try out support animals as a more affordable option.

“We said we would be happy to work with them to figure out ways to stop [fraud],” Jackson said of overtures of the disability law center to the Cullimore firm. “But we have never seen a single fraudulent request and we’ve asked them over and over again.”

Cullimore’s deposition in the lawsuit also contained a statement that repeated a claim on the law firm’s website.

At one point Conlin’s lawyer asked if Cullimore felt Utah’s laws were “tilted in favor of the landlord?”

“I wrote them. Of course they are,” he said.

Conlin’s case is still ongoing but she’s glad to be living with family at the moment and counts herself lucky she learned of her rights when she did.

“I would have been in such a pit,” Conlin said. “But it just makes me sick for other people. This happens to so many people, it is just so sad.”

There are resources and groups that can offer help to renters who have been evicted, are in jeopardy of eviction or in need of other assistance:

Visit EvictedinUtah.com for a guide to locating legal and financial aid.

The state also has a 211 hotline for evicted tenants to connect them with rental assistance.