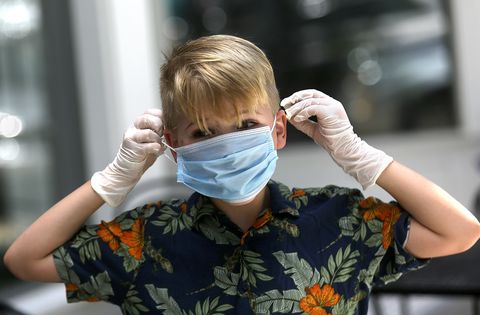 UTAH – Students at UVU and BYU are more likely than the national college population to ignore coronavirus precautions because the guidelines are inconvenient, according to a new Brigham Young University study.

The study compared survey answers from college students nationwide to answers from students in introductory biology classes at UVU and BYU. The surveys showed that Utah Valley students were slightly more likely to follow precautionary measures where they are required, like wearing masks in grocery stores. However, Utah Valley students were less likely to social distance or wear masks in small casual gatherings and large groups.

In both surveys, the biggest predictor for taking these precautions was a concern that the virus is serious.

In the nationwide survey, students were also more likely to take precautions if they were religious or had more news exposure. Students were less likely if they had strong Constitutional ideology or trust in science.

None of these additional factors predicted whether the Utah Valley college population took precautions. Instead, students who didn’t follow precautions were likely to do so because of convenience concerns – such as physical discomfort, fogged-up glasses and mask availability.

Based on the results, Jensen recommends two approaches to motivate UVU and BYU students to practice coronavirus precautions. First, messages should focus on the severity of the pandemic. Second, following precautions should be made as convenient as possible.

Even though the surveyed Utah Valley students are slightly more likely to wear masks and social distance when it is required, they may make the area more vulnerable if they abandon the guidelines in other settings.

“That is concerning for the amount of spread that could be seen in January and February, where still the vast majority of people are not going to be vaccinated,” said Ethan Tolman, a BYU senior in genetics, genomics and biotechnology who is a study author. “And that could definitely spill over into the surrounding community and have a very big negative impact.”

The authors speculate that one reason for the lack of social distancing in Utah Valley may be the community aspect of The Church of Jesus Christ of Latter-day Saints, the dominant religion in the area. Students may feel comfortable not taking precautions while socializing within their church wards.

A surprising finding of the study was that students in the general population with a greater trust in science were slightly less willing to follow precautions.

“It’s not scientists that are okay to wear masks and people that aren’t scientists that aren’t okay wearing masks,” said Spencer Shumway, a BYU sophomore in biochemistry and a study author. “There’s more things at play.” Age may have a role. Younger adults may tend not to follow the entire platform of a party and instead hold a more nuanced collection of beliefs, according to the researchers.

While some UVU students who heard about the surveys were not surprised at the results, the reasons students in Utah Valley follow and do not follow guidelines are diverse.

“It makes me want to do better because I’m part of the university,” said Rachael Norene, a UVU senior in biology. “But I want to support businesses, and I don’t always like to cook at home … I feel like, am I doing enough?”

“You can’t just pick and choose what you’re going to do,” said Nicole Halvorsen, a UVU student who hasn’t declared a major. “You can’t just wear a mask when you have to and then everywhere else you just pretend like it doesn’t exist. It’s going to affect everyone.” At the same time, she understands why people, including her, gather with extra family members for the holidays.

A UVU junior in pre-medical classes wears masks when she works at a hospital but feels that mask-wearing in other settings is a personal choice. “I don’t think there is enough hard evidence to strip a constitutional right and say you have to do this,” she said. “There are so many different studies that say [masks] don’t work or that they do work, and I have yet to really find one that I actually believe. So just saying, ‘Oh, you should do it, and we can make it so you can wear them easier’ – I think that’s manipulation.”

None of the precautionary measures is perfect, said Jonas Hopper, a senior in biology at BYU and study author, but he thinks the combination of measures can reduce the effect of the pandemic for many people.

The difference in behavior between Utah Valley and the rest of the country is not the only takeaway from the survey. Another big finding is that there is a difference at all. Unique student populations across the country believe and behave differently. University administrations can’t necessarily rely on national data to motivate their own community to slow down the spread of the virus.

Get a fresh outlook at the Utah Museum of Fine Arts