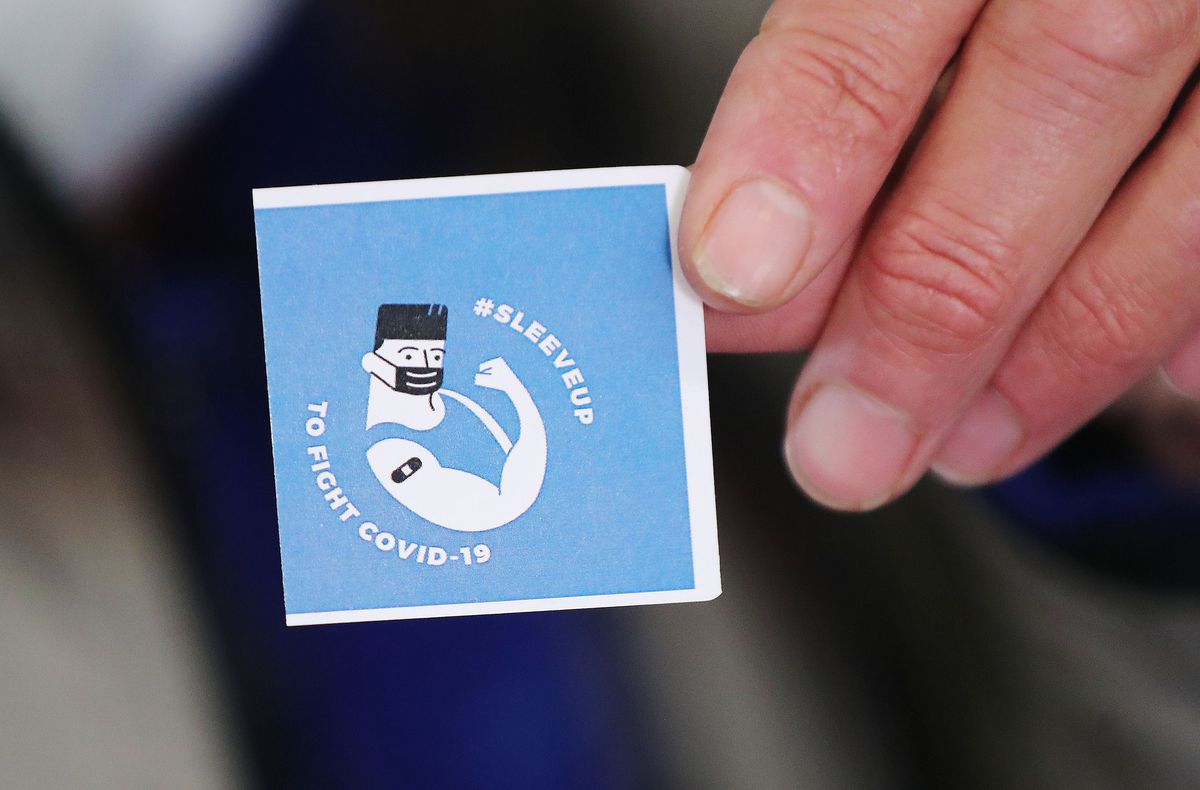 SALT LAKE CITY, Utah — Kenny Collins gave a thumbs up while the needle slid into his arm.

Collins, 49, got his first dose of a COVID-19 vaccine Tuesday in a tent set up in the parking lot of Fourth Street Clinic, a clinic that gives medical care to Utah’s homeless population.

After his shot, Collins said he felt perfectly fine, and was all smiles behind his mask as he chatted with the Deseret News about his shot.

Collins, who said he’s been staying at the Road Home’s Men’s Resource Center in South Salt Lake for the past seven months, said he was initially undecided on whether he would get the shot, with about half of his friends at the shelter hesitant about getting inoculated.

As Utah and other states throughout the nation race to distribute COVID-19 vaccines, Utah’s homeless providers are running their own race, aiming to vaccinate those among the state’s most vulnerable, whether they’re living in congregate shelter settings or camping on the streets in group settings.

But it’s been slow going for the effort to vaccinate Utah’s homeless population, with nurses at Fourth Street Clinic struggling almost every day to find enough clients willing to take the vaccine.

Among the biggest hurdles, says Pamela Atkinson, an adviser to Gov. Spencer Cox and a longtime Utah advocate for the homeless, is “vaccine hesitancy” from a population that is already generally hardened by their distrust of government and the system.

“There’s a certain level of mistrust about the vaccines,” Atkinson said. “I think it mirrors a lot of the mistrust that’s in the general public. You know, many people underestimate our homeless friends. They do read a lot of news … and they just are not quite sure.”

Misinformation and rumors spread fast among the homeless population, Atkinson said, and so advocates like herself have been trying to combat those rumors with accurate information about the vaccine — that they’re safe, effective and humankind’s best tool to date to end the pandemic.

Collins said his case worker at the Road Home told him, “If you don’t take the vaccine shot, Mr. Collins, you’re going to have to go on the street because you won’t be able to stay here. You can’t stay here because it’s a health hazard.”

But the Road Home and other operators of the Salt Lake County homeless resource centers aren’t requiring vaccines in order for clients to stay in the centers, though social workers are encouraging them, according to the shelter’s owner, Shelter the Homeless, and Michelle Flynn, executive director of the Road Home.

“It’s our role in the community to provide low-barrier shelters,” Flynn said, “So we need to make sure we’re as accessible as possible and not put up barriers for people who have no other place to go.”

Atkinson said homeless advocates have been using gift cards to grocery stores to entice more homeless individuals to come get their vaccine.

Collins got a $5 Walmart gift card from Fourth Street Clinic, along with his vaccination card, and an April 20 appointment for his second dose. He said he’d planned to spend the gift card on fried chicken or maybe some candy.

Collins wasn’t deterred by the several forms he had to fill out at the Fourth Street Clinic to get the shot, including a form telling him not to spend the $5 on drugs, alcohol or firearms. He was also unfazed by the multiple warnings that he may feel ill after his shot, but more likely after his second dose. He nodded expectedly.

After the prick, Collins was told to stick around for another 15 minutes for monitoring, just in case he had an allergic reaction. That didn’t happen, and he sent was on his way with a little blue sticker to commemorate his shot.

Not long after Collins left the clinic with a Band-Aid on his arm, another man down the street was firm that he wouldn’t get the shot.

“This whole thing is a farce,” the man, who was standing outside of the Rescue Mission, said when the Deseret News asked if he’d planned on getting his COVID-19 vaccine. He declined to give his name.

Another man nearby, also standing outside the Rescue Mission, Robert Rudd, said he had already received his first dose and planned to show up for his follow-up appointment to receive his second dose. But he wasn’t thrilled about it.

“It’s going to become mandatory eventually,” Rudd said, shrugging. “At first, I was like a real hard ‘no’ about getting it.”

Rudd explained he’s a diagnosed schizophrenic and described feeling “paranoid” about “bugs” that the “government can activate, just on a whim.” He said he’s still “a little bit” worried about that with the vaccine, but he decided to just get the shot.

“I kinda gave up the fight,” he said, laughing.

General distrust and misinformation sparking rumors about the vaccine is among the top hurdles standing in the way of vaccinating Utah’s homeless population, Fourth Street Clinic CEO Janida Emerson said.

“It’s been challenging,” Emerson said. “But we knew it was going to be challenging. This is a really difficult population to vaccinate. There’s a lot of vaccine hesitancy among the homeless and for a lot of different reasons. We find that we have to do a lot of education, and sometimes that has to take place over multiple interactions, so it’s not just as simple as sitting down for 20 minutes and then doing the vaccine. It takes multiple interactions to (gain trust) so that makes it slow.”

Vaccination rollout age limitations have also been challenging, Emerson said, as only so many 70-year-olds and 60-year-olds, then 50-year-olds in Utah’s homeless met the eligibility requirement for weeks.

And Emerson noted, some are wary of feeling ill after the shot, especially those who are already battling the elements on the streets.

“We are definitely encountering barriers around people not wanting to feel sick,” she said. “Nobody wants to feel sick and be in a camp.”

Still, they’re making progress. Over the last nearly four months since the vaccine has been made available in Utah — starting with elderly age groups and those with underlying medical conditions — nearly 1,000 homeless individuals have been given a vaccine as of this week in Utah’s most populated county with the highest concentration of homeless resources. But only about a quarter of those have been fully vaccinated so far, according to tallies from the Salt Lake County Health Department and the Fourth Street Clinic.

Fourth Street Clinic’s tallies show it has administered about 580 total vaccines (and counting) as of Wednesday, Fourth Street Clinic Development Director Laurel Ingham told the Deseret News. That includes about 114 who have received their second dose and are therefore “fully vaccinated,” she said.

Those Fourth Street Clinic counts were included in the Salt Lake County Health Department weekly tallies updated Wednesday, totaling 994 vaccines for homeless individuals, including 736 first doses, 205 second doses and 53 doses of the single-dose Johnson & Jonson vaccine. The health department has administered about 414 of those vaccines in multiple vaccine clinics held by the county health department in homeless resource centers throughout the valley.

In total, about 258 have been fully vaccinated, either with a second dose or with the Johnson & Johnson shot, according to the tallies.

Those numbers don’t include other vaccinations that could be distributed to homeless individuals by other sources, including veterans affairs centers. Other homeless providers outside of Salt Lake County are also distributing vaccines, but the Utah Department of Health and the Department of Workforce services didn’t have a statewide tally to provide to the Deseret News.

While information about vaccines can be recorded in the statewide homeless database, called HMIS, not all agencies have started recording that data, according to a spokeswoman for the Department of Workforce Services.

Early in the pandemic, some homeless resource centers saw outbreaks. County officials set up quarantine and isolation centers in then-unused county recreation facilities and senior centers, and later motels, to help isolate those exposed to COVID-19 and prevent more outbreaks.

“Once you’ve poked it, you get 10 doses out of it,” Michelle Hicks, a nurse at Fourth Street Clinic, said about the vaccine vial from which she’d drawn Collins’ vaccine. “But once you poke it, you’ve got six hours (until it expires).”

That puts nurses under a ticking clock once that vial’s seal is broken. Hicks described how some nurses will “literally (go) out on the street screaming, ‘We’ll give you a $5 gift card, everybody come in!”

“We haven’t wasted any (vaccines),” Hicks added, consistent with what other officials at Fourth Street Clinic told the Deseret News, explaining that even though some days it’s a struggle, they’ve been able to find enough people to take the vaccine so as to not waste any of the precious vials.

“I’m not really worried about that,” Hicks said. “I’m worried about finding the people, because I don’t want to make somebody get it if they don’t want it, you know? I want them to be informed and comfortable.”

Fourth Street Clinic has been vaccinating about 30 individuals a day, Ingham said.