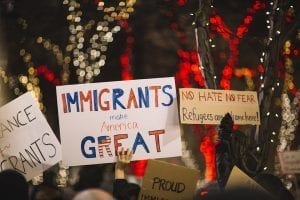 PROVO, Utah – A Utah church is lending its support to a local family filing a lawsuit against the U.S. Immigration and Customs Enforcement (ICE) agency.

According to The Deseret News, lead plaintiff Vicky Chavez, a native of Honduras, has spent the past three years trapped inside the First Unitarian Church of Salt Lake City.

Chavez, along with her two young children, had earlier sought refuge inside the church. Having already exhausted her appeals to remain in the United States, Chavez was on her way to the airport when the First Unitarian Church called and offered her sanctuary within.

While Chavez and her family arrived to the United States illegally, Immigration and Customs Enforcement officers adhere to guidance preventing them from executing warrants, detainers, or arrests against migrants in sensitive locations, such as churches or schools.

Now, the First Unitarian Church has signed aboard Chavez’s lawsuit as a plaintiff, joining her and three other migrant women enduring similar situations in Ohio, Texas, and Virginia.

“The past three years have taught us that faith cannot be passive,” Goldsmith said. “It must fight alongside those who seek to right the tyranny of injustice.”

“It’s also a message to other faith groups that says, ‘Look, get off your rump. There’s a lot of work ahead of us,’” he added. “It’s one thing to preach the message of welcoming a stranger on a Sunday morning; it’s another thing to be actively engaged in making sure that happens.

And it’s not been without cost—Goldsmith’s church has been fined hundreds of thousands of dollars for harboring Chavez. While the fines have since been reduced to $60,000, immigration attorney David Bennion was quick to call the fees “an unconscionable and egregious amount.”

Bennion said he believes the Trump administration intentionally targeted the church and its allies for speaking out against the White House’s harsh immigration tactics.

“Because these leaders spoke out, the Trump administration took the extraordinary measure of targeting them,” he said.

The Deseret News quotes Chavez as saying that church members have been actively helping her improve her English; she hopes to become an accountant after winning the right to remain in the United States.

In the meantime, Chavez has asked the Biden administration to intervene.

Until it does, Chavez has pledged to continue fighting from inside the church.

“I will continue to fight for them in order to show the world the immigration system in the U.S. is unjust,” Chavez said.