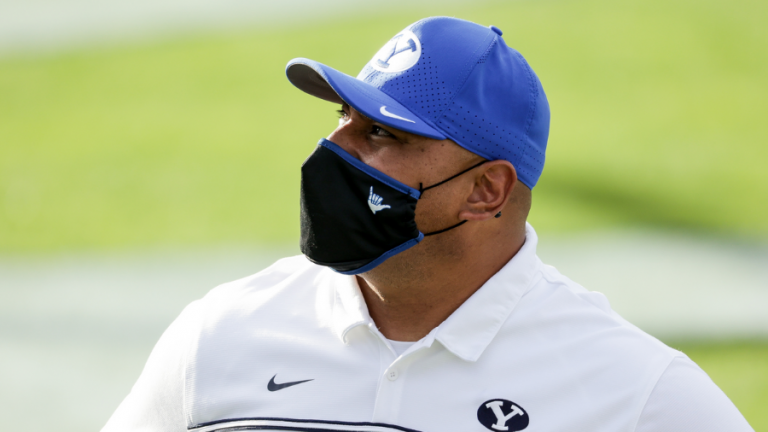 PROVO, Utah – The Football Writers Association of American (FWAA) and the Allstate Sugar Bowl named BYU’s Kalani Sitake as one of nine finalists for the 2020 Eddie Robinson Coach of the Year award.

Sitake has led the Cougars to a 10-1 record this season and ending with a No. 16 ranking in the final College Football Playoff top 25 of 2020. BYU is the only FBS team in the country currently ranked in the top 10 in scoring offense, scoring defense, total offense and total defense.

“The Allstate Sugar Bowl is proud to sponsor the Eddie Robinson Award and to once again have the opportunity to recognize the top college football coaches in the nation as finalists for this honor,” said Ralph Capitelli, the President of the Allstate Sugar Bowl. “While each of the finalists is fully deserving of the award, we look forward to presenting the trophy to the winner as selected by the football writers.”

The nine finalists have been placed on a ballot which has been sent out to the entire FWAA membership. They will announce the winner of the award during the week of Jan. 4-8, 2021.

“Kalani is very deserving of this honor,” said BYU director of athletics Tom Holmoe. “He was at his best this year in the midst of a pandemic. He implemented the necessary changes from last season in personnel and strategy and built a team this year based on leadership, unity and having fun playing the game.”

“The FWAA believes it has an extremely good group of coaches representing different conferences and independents,” said Executive Director Steve Richardson. “We will have a fine recipient for the 2020 Eddie Robinson Coach of the Year Award. The FWAA’s congratulations go out to all coaches for weathering what has been a very trying and unpredictable year.”

BYU is hoping to add to the McKenzie legacy in Provo