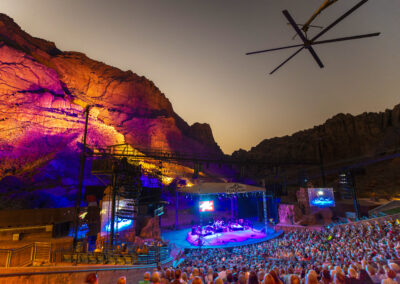 Utah – Cancellations of the 2020 theater season for Tuacahn and the Utah Shakespeare Festival did more than just disappoint theater patrons – it resulted in a huge hit to the economy in Southern Utah.

Kevin Lewis, Tourism Director for the Greater Zion Convention and Tourism Office, said in non-pandemic times, Tuacahn has an annual impact of $100 million.

“That’s everything from hotel accommodations, dining, activities they are involved with and tickets to the theater,” he said.

The “Broadway in the Desert” shows presented at Tuacahn are so popular, this venue is one of the top tourism draws for the St. George area.

“We are the largest economic engine outside of Zion National Park, which is a federally funded group,” said Scott S. Anderson, artistic director for Tuacahn.

COVID-related cancellations at the Utah Shakespeare Festival were similarly harmful to the economy. The festival has an annual estimated $35 million impact on the Cedar City area. Typically, around 100,000 tickets are sold to patrons each year.

In addition to all the tourism dollars generated by Tuacahn and the Shakespeare Festival, these companies hire hundreds of people who live in Southern Utah during the theater season. Mack said they were unable to fill the contracts of 275 people last year because of the cancellations. This, in turn, caused the actors who normally perform at the festival and Tuacahn to retool, and in some cases, find jobs outside the theater industry.

Equity Actor Rhett Guter said the canceled season at the Shakespeare Festival prompted him to return to his original passion, which is performing magic. Because many people are still working from home, Guter created a virtual magic show which he performs for private parties and companies who have online conferences.

While Equity Actors got creative with their response to the closures, the Shakespeare Festival and Tuacahn and were able to survive in part by help from loyal theater patrons.

“Eighty percent of our season ticket holders held onto their tickets for 2021,” said Kacey Jones, development director for Tuacahn.

As the regional theaters prepare to reopen for 2021, patrons will notice a few changes. Tuacahn and the festival are both working closely with the state of Utah on safety guidelines designed to keep actors and theatergoers safe. Masks will be required for those in the audience, hand sanitizers will be available and other safety measures, such as enhanced sanitizing procedures, are being implemented.

Despite the challenges of re-opening this summer, Tuacahn and the Shakespeare Festival are gearing up for slightly expanded seasons. Tuacahn is doing four outdoor shows instead of just three, plus a Christmas show and a whole slate of concerts.

Anderson said he’s especially pleased that Tuacahn will be performing “School of Rock.”

“We will be the first theater in the U.S. outside of Broadway and the Tour presenting ‘School of Rock,’” he said. “The other outdoor musicals at Tuacahn include ‘Beauty and the Beast,’ ‘Annie’ and ‘The Count of Monte Cristo.’”

In Cedar City, the Utah Shakespeare Festival will be performing some of the plays originally scheduled for the 2020 season. In addition to a variety of Shakespeare favorites, the festival will offer a number of musicals and some special surprises, including performances of the classic American play, “Ragtime.”

2021 marks the 60th anniversary at the Shakespeare Festival, with the entire season being dedicated to founder Fred C. Adams who died in February 2020.

Tuacahn reopened last fall with a series of what they said were well attended concerts. They will kick off the new season with a show called “Siva Pasefika – Spirit of Polynesia,” followed by a performance by the Odyssey Dance Theatre and several concerts. The summer lineup begins May 7 with the opening of “Beauty and the Beast.”

In Cedar City, the Utah Shakespeare Festival will preview “Pericles” on June 21 and “Richard III” on June 22. The festival will open different shows as the season progresses, wrapping up on Oct. 9 with a play “Intimate Apparel” and a satire called “The Comedy of Terrors.”

With all the new safety protocols in place, Tuacahn and the Utah Shakespeare Festival are hoping 2021 will be a banner year for theater in Southern Utah.

Editor’s note: The opening paragraph of this story previously mentioned the 2021 seasons having been canceled instead of 2020 in error.