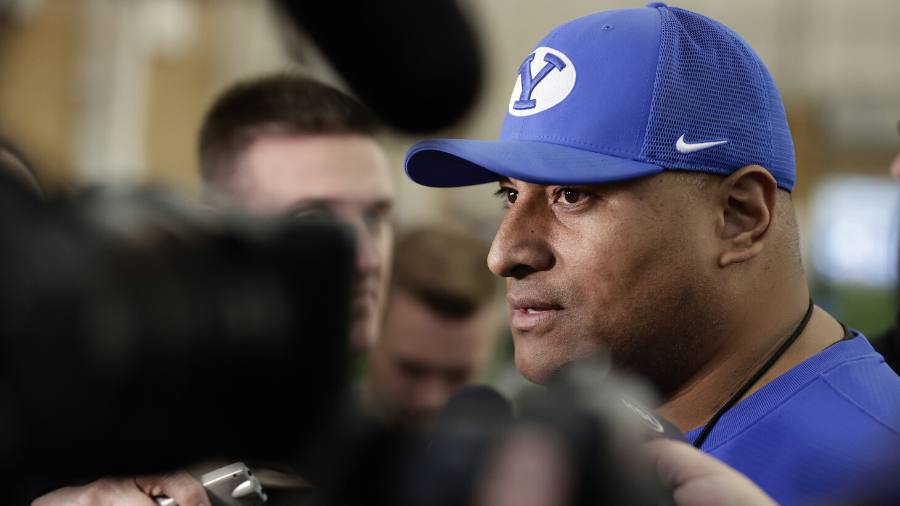 PROVO, Utah – BYU athletic facilities will begin a “multiphase” opening on campus starting June 1st. It’s another sign that society is moving closer to phase green and a “new normal” amid the COVID-19 pandemic.

BYU head coach Kalani Sitake is ready for his players to be back on campus. Even though it’s on a voluntary basis, Sitake believes most of the players will be on campus for workouts on June 1.

Its cliche to say anymore, but it’s fitting, these are unprecedented times that we’re living in. Social distancing and small groups have become part of daily lives.

So it begs the question, how are workouts with nearly 120 college football athletes going to look during a pandemic?

Kalani Sitake on how voluntary workouts will look at BYU

“We’re going to have our guys check temperatures, we’re gonna be able to have them utilize spacing in our workouts,” Kalani Sitake said to KSL Sports. “And we will have four different workout groups and none of them are going to be over 30 people.”

Athletic facilities at BYU have been closed down since the outbreak of the Novel Coronavirus back on March 12th. Messaging from BYU athletic director Tom Holmoe has been that when sports “kick back in,” BYU is going to be ready to go.

Days after the NCAA announced voluntary workouts could happen on campuses starting June 1st, BYU was one of the first institutions out west to announce facilities would start to open back up.

“I think our athletic director Tom Holmoe has done a great job and working with our administration has been awesome,” said Sitake.

Social distancing and maintaining six-feet apart in college football would seem to be a difficult task to accomplish. Especially with locker rooms being so close together. By having four separate workout groups, Sitake believes it can be done.

“The key is having different workout groups. In years past, we had workouts with the whole team. Since they are voluntary, it’s not like the four groups are going to be full,” Kalani Sitake said. “I think the majority of the guys will be here. I imagine 90 percent of our team will be here during those workouts. Some of them are going through weddings and things like that in the next little bit.

“The plan in place was thought about weeks ago when we put this together. One thing I know is that our leaders here are really good at adjusting and making any transitions that we have to. We will do whatever is best for the players to keep them safe but in the meantime, I know we are working towards getting back to normal and that means they have to train. Accommodating that is going to be really important for their health later in the season.”

No coaches will be at the workouts, but meetings are still taking place

Coaches are not allowed to be present at the voluntary workouts due to NCAA rules. But virtual meetings in position groups and as a team will continue throughout the week and they’ve been taking place regularly since April 25th.

These voluntary workouts are valuable for the players as there won’t be any additional practices given to teams prior to the start of fall camp.

“Allowing us an opportunity to have voluntary workouts is a huge step for football but also for our program. I’ve been really pleased with the way the guys have conducted themselves throughout the pandemic and the quarantine. Moving into this next transition is going to make a lot of sense for us.

As coaches, we have to be mindful of the situation but also use good practice habits as far as teaching and learning and meeting. So we’re doing that. We have great guidance and we’ve been able to communicate with our athletic department really well in all different phases that we’re going to reach.”

What happens if a player contracts the Coronavirus?

College football is on pace to return as scheduled by evidence of athletic facilities like BYU opening up on June 1st. But what happens if a player contracts the virus? Will everything shut down again?

“The plan is to make sure that we get ahead of it,” said Sitake. “That’s why them checking in and being at the right distance, but also [trainers] checking their temperatures and knowing when to let guys into workouts. I think that will be really important. The last thing we want is a guy to come in there that has the virus. ”

BYU’s strength and conditioning led by Nu’u Tafisi, AJ Middleton, and Justin McClure will be at the forefront of monitoring the workouts along with numerous trainers and professionals to make sure the student-athletes are safe.

“Tom (Holmoe) has established a really good plan in what we can get done in the next six weeks leading up to fall camp. I think we follow those guidelines to a T and we’ll be really strict with it. I think if we do that, we’ll be in a really good place.”