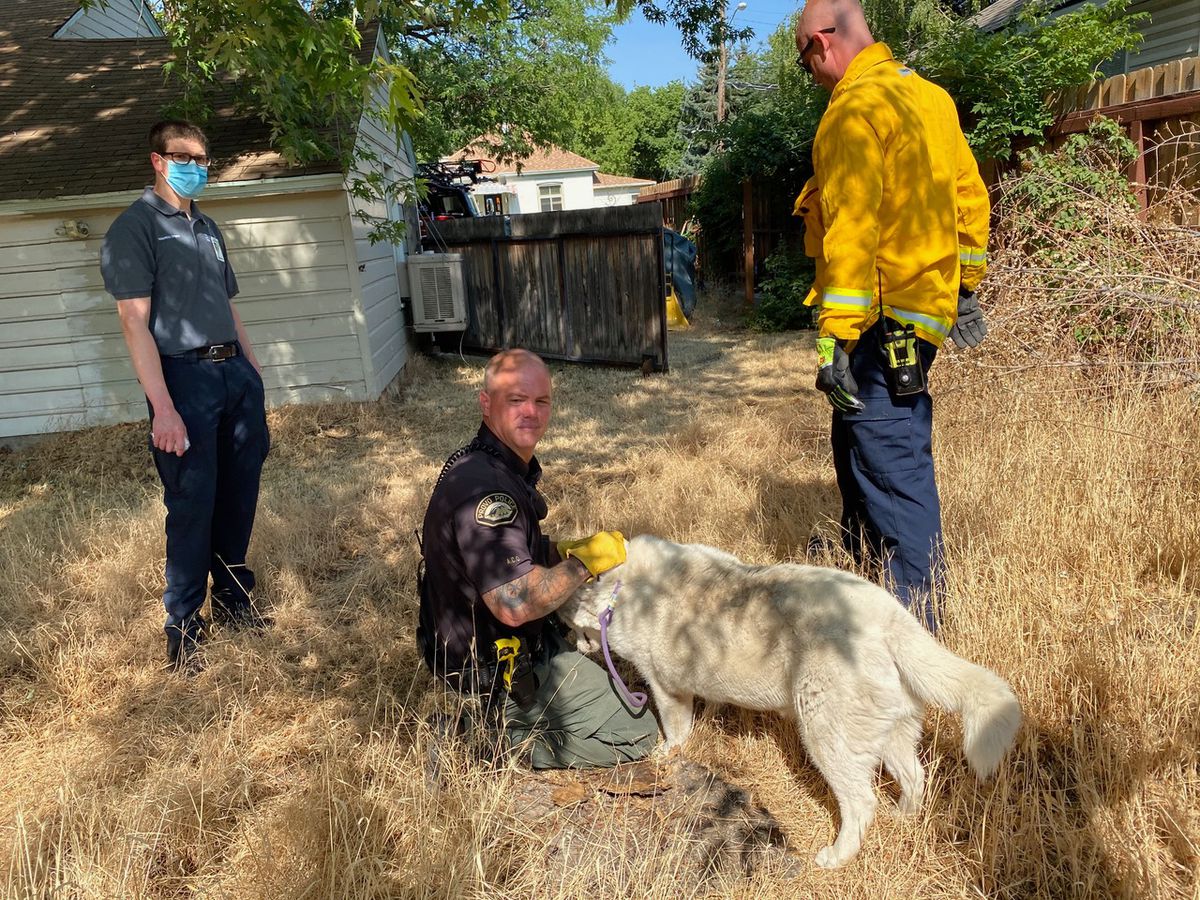 PROVO, Utah — Elsa crashed through the dilapidated wooden roof and found herself in a dark, forgotten cellar.

She likely had no idea what happened, as moments before, she’d been frolicking in a field with some of her best pals.

She cried for help, but no one came.

Day turned to night and then back into day. It was summer and the dry heat made her desperate for water. Hunger came and went, and so did sleep. Where were her friends? Was this a trap? Did someone want to take her prisoner? Had her friends been captured in some other way? Was this how her story would end?

When she had the energy, she cried and howled, hoping someone would hear her, find her and rescue her.

Unbeknownst to her, someone did hear her cries. And they summoned help.

Imagine Elsa’s confusion, maybe even fear, when she looked up and saw faces appear through the shards of broken wood above her head. Turns out, her rescuers were equally confused as they answered a call for help that was, to say the least, unusual.

“We were told a dog had fallen some distance,” said Provo Fire and Rescue Capt. Brian Tanner, noting they prepared to head out on the call Thursday morning, trying to figure out if the information dispatchers provided meant the dog had fallen into a hole outside or through the floor of a structure.

“We tried to imagine what kind of picture we’d see when we arrived. … We were kind of confused and weren’t sure what to expect,” he said.

What they found was a scared pup who’d fallen into what was once a cellar for food storage that was no longer in use.

“It was in the backyard of a home,” Tanner said. “And it was a hand-dug food cellar that had been there for years and years, and it had a wood roof that had long since deteriorated, and when a group of dogs ran through the area, this one dog fell through.”

Elsa barked and whined, but the humans within earshot didn’t really understand the dog was in distress.

“The homeowner had been hearing this dog whining for a couple of days,” Tanner said. “But they thought it was the neighbor’s dog. They didn’t realize it was coming from down in the food cellar. I’m not sure how they realized it, but when they did, they called for help.”

That call went to Tanner’s crew at Fire Station 23.

“We put a ladder down the hole, and then we used saws to cut away roof rafters,” he said, noting the plan came from “rocket engineer Brian Fish.”

Fish, also referred to repeatedly as “the dog whisperer.” climbed down into the cellar first and reached out to Elsa, petting her dusty, white coat, and letting her know he was there to help. While Animal Control officers put some water in a bowl, Tanner sent another firefighter to help Fish.

“We put Trent Andrus down the hole,” Tanner said, “And he crawls down in there, understanding the dog might be injured, and they can misbehave.”

The team passed the bowl of water down to Andrus and Fish, and they gave it to a very grateful Elsa, who drank it all. She could only thank them with a look from her blue eyes and shy compliance.

“It took a second to let (her) get accustomed to us,” Tanner said. “But then we were able to use a mega mover, which is a special blanket with straps that we use to help carry patients in awkward situations. We coaxed the dog onto the mega mover, and (she) really wasn’t comfortable at first.”

“Maybe six feet long and three or four feet wide,” he said. “Imagine you’ve laid webbing across the back and side, with loops down the side and across the top and bottom. It will hold a ton of weight; it will carry 400 to 500 pounds.”

Normally firefighters would lay a patient on the mega mover and then get to rescuing. But Elsa wasn’t so sure she wanted to be wrapped in the course material.

“We had two guys down in the hold wrapping the dog, and they carried (her) halfway up the ladder,” Tanner said. “Then two other guys grabbed the dog and pulled (her) up. It definitely wasn’t a one-man job. (The dog) was a little squirrely.”

As soon as the rescuers pulled Elsa out of the hole, one of her best pals — a black and white border collie mix named Ding Dong — ran up to see if she was OK.

“Another dog came right up to (her) and sniffed (her),” he said. “They were super happy. And then they did what dogs do.”

Elsa was a bit dirty and extremely thirsty, but she wasn’t hurt, according to Provo Fire and Rescue Capt. Sam Armstrong. The dogs were reunited with their grateful owners, and the crew from Station 23 was able to get back to the firehouse and finish the workout the call interrupted.

“It’s something unique,” Tanner said. “We were nervous because it was a big dog. It could have done some damage.”

Instead, she greeted her rescuers with gratitude, and eventually there were pats all around. Elsa was reunited with her family where she will, hopefully, live happily ever after.