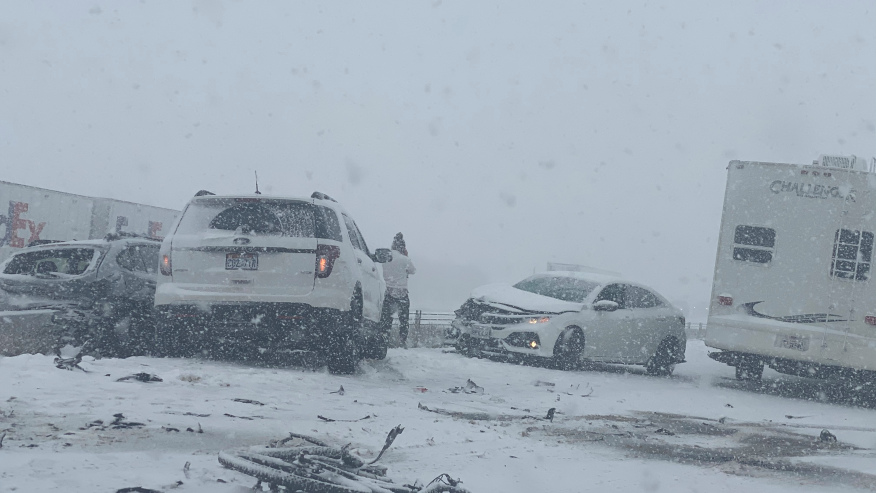 Utah – As snow sheds over the southern part of the state, many seem to be unprepared causing crashes to pile up along Utah highways.

According to ABC4’s Chief Meteorologist, Alana Brophy, a large, slow-moving area of low pressure is exiting the state, but it’s not going quietly.

“Snowfall will not wrap up in the state until midday Sunday. The low will slowly exit the region through Saturday, but the Western and Northern periphery of the low will provide significant lift over Southwest Utah allowing for heavy snow to fall which will lead to rapid accumulations of area roadways, including the I-15 corridor from I-70 at Cove Fort South to Cedar City,” Brophy informs.

According to the Utah Highway Patrol, there have been many crashes as snow continues to build up in the southern area of the state.

“Update in Southern Utah. Our Troopers from St. George to Fillmore have handled 60 crashes in the last 24 hours on I-15 and I-70,” they inform.

Brophy says, the National Weather Service issued a “Winter Storm Warning” for a large portion of Southwest Utah which will remain in effect until 9 a.m. Saturday. However, the snow has shifted with heavy accumulation focused on the west desert with impacts from Milford to Enterprise including highways 21, 257, and 56.

Just the other day on March 12, as snowfall initially began, many drivers on Southern Utah roads were caught off guard, especially those operating semi-trucks.

UHP Captain Beau Mason shares, “We now have a semi rollover southbound I-15 near MP 100 which is just south of Beaver. Traffic is getting by slowly but expect some delays. @UDOTTRAFFIC plows are out in force doing everything they can to clear the roads.”

“Whenever a warning is in place, expect winter driving conditions through Saturday, especially under the heavier bands of snow. Though we are into the late stages of winter, do not get complacent with regards to driving in snow,” Brophy concludes.

Utah cross-country: Poppy Tank proud to represent Utes at NCAA championships, even if she is running alone