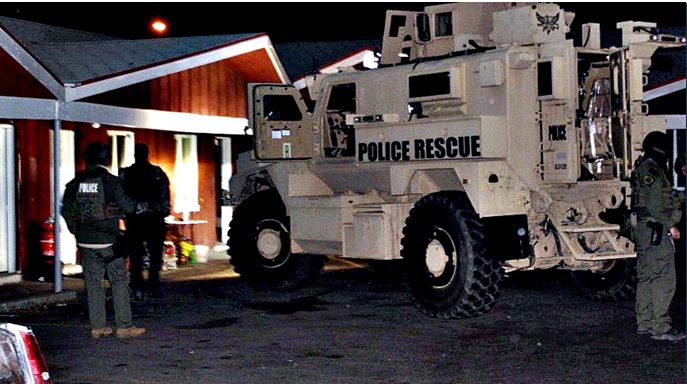 PROVO, Utah— A suspect in three Utah bank robberies was taken into custody after a multi-hour SWAT standoff Thursday in Provo.

“After a seven-hour standoff with the Provo/Orem/BYU/UVU Metro SWAT Team, Dennis Craig Wing, a 60-year-old Springville man was taken into custody for the robbery at Key Bank in Provo on 12/11/20,” a Provo Police Department statement says.

Wing was booked into the Utah County Jail and faces charges of:

A probable cause statement filed in Wing’s case alleges that on Dec. 11, he entered a Key Bank in Provo.

“Once he was inside the bank, he approached the bank teller and passed him a note which stated for the bank teller to put all of the money in the bag,” the statement says.

“The note stated this was not his first time and that he had ‘a gun, cocked and loaded.’ Dennis then handed the bank teller a grocery bag for him to put the money into. The bank teller did what Dennis told him to do and put over $2,100 in cash into the bag.”

The statement, filed by an officer of the Provo Police Department, says Wing then fled on foot.

“Dennis later robbed a bank in both Orem and Springville each about a week apart. He also threatened a gun in the other bank robberies. Dennis has spent a long period of time in prison for other violent crimes, the most recent of which he caused serious bodily injury with a knife to the victim.”

On Thursday, a search warrant was served on a room in the Valley Inn. Officers arrived at about 5 p.m. with a SWAT team.

“While attempting to serve the warrant at about 1700 hours, Dennis barricaded himself in room 11 at the Valley Inn with (a woman) who is his girlfriend,” the probable cause statement says. ”

The woman said Wing had taken her phone at about 10 a.m. that day, and removed the sim card.

“(The woman) stated that Dennis slapped her multiple times in the face throughout the day, controlled her actions, what she was able to say, and held her in the room against her will from about 1000 hours on 12/31/2020 to 2157 hours on the same day.”

Wing, who police say was on federal probation, “also actively fought and resisted arrest when SWAT officers attempted to take him into custody.”

Officials found about 3.3 grams of a crystalline substance on the room’s sink counter, and it field tested positive for meth, the statement says.

Wing was taken into police custody, and is being held without bail, the statement says.