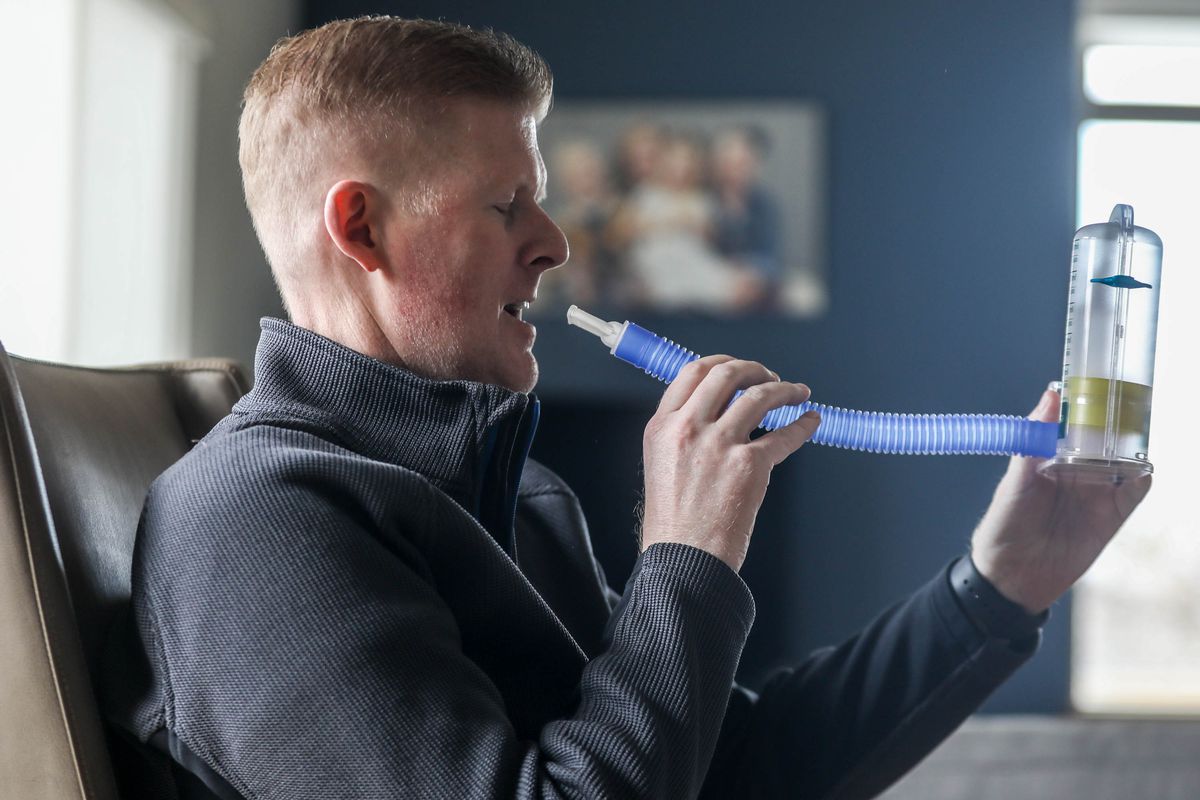 Utah— At first, Rep. Jon Hawkins thought it was just a cold. At least, that’s what he concluded from several negative COVID-19 tests for him and his family back in January.

But five days of taking NyQuil and drinking lemon water with honey wasn’t helping his scratchy throat. And he realized something was very wrong when the short trek up the stairs from his office in the basement of his Pleasant Grove home left him winded.

So Hawkins went to an urgent care clinic, which found his oxygen levels were low. He took another COVD-19 test and went home with an oxygen tank.

But that night, at about 3 a.m., Hawkins said he woke up and told his wife, “Mary, I can’t breathe.”

So they went to the emergency room. There, hospital staff checked him in and looked up the results of his latest COVID-19 test. It was positive.

“So they took me back immediately, and left my wife there,” Hawkins said, his voice still raspy, but improving, from weeks of having a tube down his throat to help him breathe. “And that was the last time I saw her for (over a month).”

What followed was a battle for his life — and an emotionally scarring experience for his wife and their four kids. Mary Hawkins, who could only see her husband over Facetime for weeks, didn’t know if he would make it out of the hospital alive.

The Pleasant Grove Republican and his wife sat down for an interview with the Deseret News last week in his home to describe his life-threatening battle against the novel coronavirus that has gripped the world over the past year and taken the lives of now over 546,000 Americans. He discussed the emotional fallout his near-death experience left both in his household and in the Utah Legislature.

“It was an emotional roller coaster for everyone,” said Mary Hawkins, who not only grappled with the mortality of her husband while he was unconscious for weeks, but navigated media requests and uncertainty if her husband, a public official, would live to cast another vote.

Jon Hawkins said he wants Utahns to understand the serious effects COVID-19 has had not only on his own body — even as a healthy 42-year-old man — but also the emotional toll it’s taken on his family, who felt helpless while he fought for his life.

“This is real,” Jon Hawkins said.

“I get emails all the time that say, ‘Oh it’s a hoax, the governments trying to control us, it’s not real.’ And, you know, I’m fine if they want to say that to anybody else, any other representative or senator. But they can’t say that to me anymore. It’s real.”

Asked about the April 10 expiration date for the statewide mask mandate — which is the latest date Gov. Spencer Cox said he could get from legislators who were poised to lift the mask mandate immediately — Hawkins said it’s not a date he’s on board with, though he also said he understands why some of his House colleagues wanted the mandate to end.

“I think April 10 is a little bit premature,” he said, urging Utahns to continue wearing masks until medical professionals tell them it’s safe not to.

Most importantly, he urged all Utahns to get vaccinated as soon as possible.

‘If we don’t intubate you, you will die’

Jon Hawkins said when he first was admitted into the hospital, he didn’t grasp the seriousness of his situation. Then his memories get foggy. He said he remembers feeling extremely thirsty, unable to eat or drink while an IV kept him alive. He continued to struggle to breathe even with oxygen assistance.

Then, on Jan. 18, the day before the start of the 2021 legislative session, Hawkins said he was told, “If we don’t intubate you, you will die.”

Hawkins said that moment he was filled with dread, because he remembered when he was first told if he needed to be intubated (which entails putting a tube hooked up to a ventilator down one’s throat to pump oxygen into the lungs), he’d only have a 60% chance of living.

That day, when Hawkins called his wife and told her, she said tears were “streaming down his face.”

“And I could tell he felt like maybe this is the last time he was going to talk to us ever again,” Mary Hawkins recalled. “And I remember just hurting more than anything that he was so scared and having to do that all by himself, with none of us there to help.”

In the moments before he went under anesthesia, Hawkins said his mind went blank except for thinking: “This was just something I had to do in order to survive. And I don’t know if I actually will. When you’re facing your mortality, you just try to think, like, was I a good person?”

Then, Hawkins was unconscious, and stayed unconscious for about 23 days. He said at that point, “this becomes Mary’s story” because while he doesn’t remember anything, she was left alone to hold her family together while she feared the worst.

For weeks, Mary Hawkins couldn’t go to the hospital to visit her husband in person. All she could do was watch his declining condition from his online chart, which she had access to because she’s a nurse.

There were days, she said, when she’d wake up and dread picking up her phone.

“I’d literally just sit there for almost like 10 minutes in the morning giving myself a pep talk,” she said. “‘It’s time to call the hospital. You can do this.’ But not knowing what I was going to hear when I called … The unknowns were just overwhelming.”

Hawkins said she’s struggled with the anxieties of the past few months, but found support in their oldest daughter, who is 16. Jon Hawkins said their kids were “champs” through it all. And they both described gratitude for the outpouring of support from their community members and “thousands” of prayers.

“We know that there was a lot of divine intervention and the power of prayer,” Mary Hawkins said.