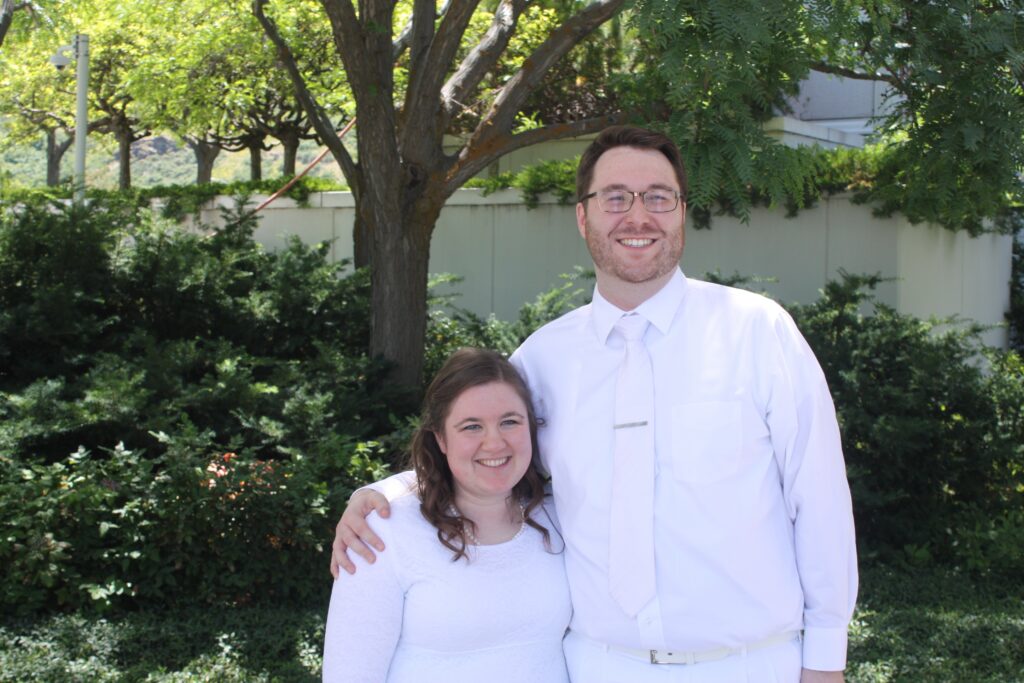 PROVO, Utah – A few months ago, I wrote about how it felt to try to plan a wedding after the First Presidency’s announcement on March 25 to close all temples around the world due to the worldwide COVID-19 pandemic.

“Our June wedding date is far enough away that social distancing restrictions might be lifted and the Bountiful Utah Temple, where we’d scheduled our sealing, might open again. But there’s no way to know for sure,” I wrote.

Six weeks later, the First Presidency announced “a carefully coordinated, cautious, and phased reopening of temples,” beginning on May 11. My fiancé, Kenny, and I were relieved to see the Bountiful Utah Temple on the list of the first temples to open in Phase 1.

As soon as possible, I contacted the temple to reschedule our sealing. As the temple worker on the other end of the phone call explained the new procedures, it was immediately clear that our sealing would be different from what we could have expected originally.

On June 26, Kenny and I arrived at the Bountiful temple dressed in our white temple clothes, since we wouldn’t be able to change clothes inside the temple. We were joined by 12 guests, just under the allowed limit of 16. No one else would be waiting outside to greet us as we exited, not even professional photographers.

Processes had to be streamlined to minimize our time spent in the temple and to keep the temple patrons and workers safe. As a result, ours was the only sealing scheduled from noon to 1 p.m. that day.

When I asked my husband to describe his impressions from our sealing and what he remembered most, he wrote, “It was a strange realization that aside from a handful of people serving in the temple, the members of [our] group were the only ones in the temple. There was a reverence I had never felt before. It felt as if the connection to God was unimpeded and was at its strongest. There were no worldly distractions with [us] at the time as we were overjoyed to be in the temple getting sealed. Everyone in our group who attended our sealing with us was of one mind and spirit. They were happy to be there to see [us] be sealed for time and eternity.”

It was our first — and last — time in the temple in months. I thought about how difficult of a decision it had to be for President Russell M. Nelson and other Church leaders to cease all temple operations.

“We would not choose this present set of circumstances,” Elder David A. Bednar of the Quorum of the Twelve Apostles said in a Church News interview in April. “But given that they are upon us, it will help us have eyes to see things we have never seen before and ears to hear things that we have never heard before. Our appreciation should be greatly increased, because often those of us who live close to temples can become casual and take them for granted.”

My appreciation for the sealing ordinance was greatly increased that day. Through the careful phased reopening of temples, I could see how monumentally and eternally important it is for the sealing power to be back on the earth so Kenny and I could become eternal companions.

I was also reminded of an experience I had months before the COVID-19 shutdowns.

When figuring out which temple to be married in (Salt Lake would have been our top choice had it not been closed for extensive renovations), Kenny and I attended an endowment session at the Provo City Center Temple. I hoped he would have such a spiritual experience to realize that was the temple we needed to be married in. Instead, I received a distinct impression from the Spirit: “The covenants made here are exactly the same as in every other temple.”

Gently chastised, I realized I needed to focus on the sealing ordinance and the covenants made in the temple rather than its appearance in wedding photos.

With that in mind, wedding planning, even during the pandemic, came a bit easier because I knew that in the end, what mattered most to me was that I would be sealed to my husband for time and all eternity.

And while kneeling at the altar across from Kenny, the same thought struck me. The covenants we made that day, despite all the differences we could list, were exactly the same as we would have made with 30 more guests and a temple bustling with activity.

My husband and I are grateful for the spiritual experience we had on our wedding day. As we patiently wait for the phased reopenings to continue and we’re able to enter the temple again, we’ll put into practice what Elder Bednar taught:

“In a season when we have temporarily suspended temple operations, it is a choice opportunity to invite the covenants and ordinances to pass through us,” he said. “The lessons learned in our previous temple experiences are not recalled only when we are in the temple.” Those teachings “are in our minds, hopefully in our hearts. And we can have access to those learnings and those memories anytime.”