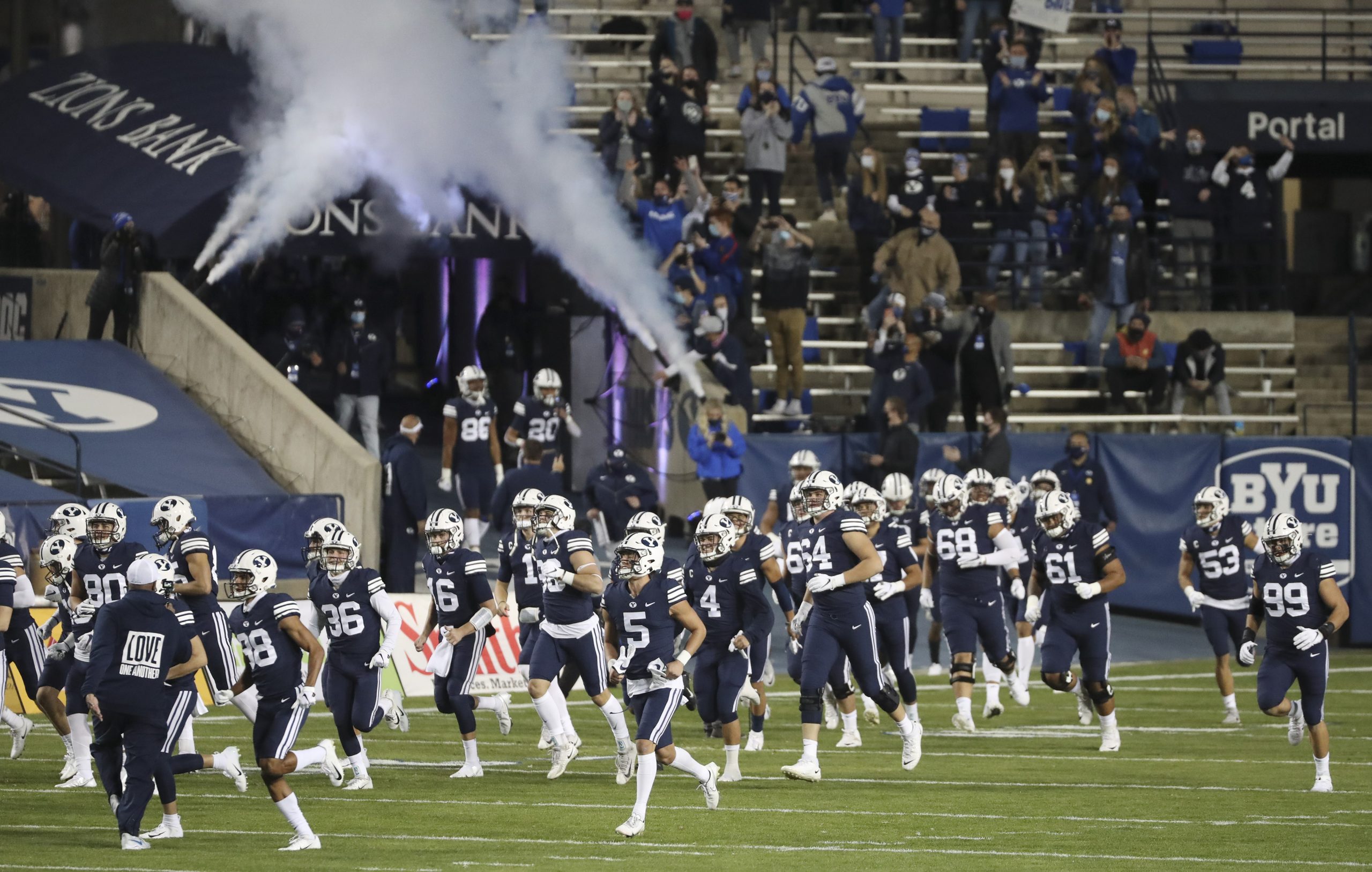 PROVO, Utah — Back in the middle of July, after BYU’s extremely challenging 2020 football schedule had been decimated by cancellations, a report surfaced that the Cougars were talking to Alabama about a possible week 1 matchup in Tuscaloosa to replace Utah on BYU’s schedule and USC on the Tide’s.

“Anybody. Literally anybody. We’ll play whoever wants that smoke,” BYU senior nose tackle Khyiris Tonga memorably tweeted at the time.

The dream matchup — for the Cougars, anyway — never materialized as the SEC to which Alabama belongs decided to delay its start due to the coronavirus pandemic. But Tonga’s tweet, retweeted by several of his teammates and safeties coach Preston Hadley, showed the Cougars weren’t interested in ducking anybody.

The sentiment still stands, even as the Cougars (5-0) have started the season undefeated and risen to No. 11 and No. 12 in the national polls.

“Whoever we play, whoever we have to play, we are just ready to play,” sophomore linebacker George Udo said. “If they are a higher-up opponent or whatever, we want to play.”

The Cougars’ mentality of being ready to play anybody — from Alabama to North Alabama — will be tested late Saturday night when they host Texas State at LaVell Edwards Stadium (8:15 p.m., ESPN) in front of a pandemic-limited crowd of 6,000 spectators. BYU is a four-touchdown favorite over the one-win Bobcats, but the visitors’ 1-5 record isn’t representative of the kind of team they are because they lost by just a touchdown at SMU and by field goals to the Power Five’s Boston College and UTSA — the same UTSA that BYU downed just 27-20.

“I think you can see it in the way the players are playing the games. That’s from them — wanting all the smoke. You see that from Kalani. For instance, he is not afraid to go for it on fourth down from anywhere. … That’s the mindset, because you can’t flinch.” — BYU safeties coach Preston Hadley

“They will be ready to play us,” BYU coach Kalani Sitake warned. “They know the situation. … From what I have seen, they are highly competitive, and if you look at their games, they are capable (of winning more). We have to be ready, because we are going to get their best shot this weekend.”

The Cougars will be going for a Texas sweep, having downed UTSA and Houston in successive weeks, but they fell behind both those teams and showed some weaknesses that Sitake, Hadley and offensive line coach Eric Mateos said they have worked all week to fix.

The same kind of focus will be needed next week when 1-4 Western Kentucky visits for another chilly Halloween night showdown on ESPN. After that, no extra motivation will be needed — the Cougars head north to meet up with Boise State on Nov. 6 in what is shaping up to be their most important game in years if they take care of business against the Bobcats and Hilltoppers and the Broncos handle Utah State on Saturday and Air Force on Oct. 31.

“This is a good Texas State team,” senior safety Zayne Anderson said. “We are not even worried about the future. As we have seen in the past, where we win big games and then we lose games we shouldn’t lose, we can’t lose focus. … We are really locking in and taking each game seriously.”